The Art Department has 143 artworks by Pierre-Joseph Redouté (1759–1840), including line and stipple engravings, pencil drawings and watercolor paintings. Several of these artworks were published in his Les Liliacées (Paris, Didot, 1802–1808[–1816]) and Choix des Plus Belles Fleurs et des Plus Beaux Fruits (Paris, Panckoucke, 1827–1833) and his and Claude-Antoine Thory's Les Roses (Paris, Didot, 1817–1824).

Probably the most famous of botanical artists, Pierre-Joseph Redouté (1759–1840) was born in Saint-Hubert (then a part of Luxembourg and now Belgium) into the third generation of artists in the family. At the age of 13 he set off to travel through Luxembourg, Flanders and Holland to study and work as an itinerant painter. He was greatly influenced by the Dutch flower painters.

At an early age, having been an itinerant artist and, with his older brother, a designer of stage scenery in Paris, Redouté discovered the Jardin du Roi. There the young artist's promise was recognized by the wealthy amateur botanist Charles Louis L'Héritier de Brutelle (1746–1800), who provided instruction in the essentials of botany and access to his own fine library and engaged Redouté to illustrate botanical texts. They would come to collaborate on several botanical projects, including Sertum Anglicum (Paris, Didot, 1788 [1789–1792]), which documented exotic plants growing at Kew. The artist Gérard van Spaendonck (1746–1822) was also impressed by Redouté and befriended him, giving encouragement and training in art techniques to match L'Héritier's scientific instruction and arranging Redouté's appointment to the staff of the Jardin des Plantes at the Muséum National d'Histoire Naturelle (Jardin du Roi was nationalized and renamed in 1793). In his early Paris years, Redouté followed van Spaendonck's lead, painting in transparent watercolor and also adopting the stipple-engraving process.

In 1794 Redouté and his brother Henri-Joseph (1776–1852) were officially appointed painters of the vélins at the Jardin. Pierre-Joseph also had begun to exhibit his flower paintings at the Paris Salon in 1796. He found favor at court and was appointed draughtsman to the Cabinet of Marie-Antoinette through the influence of L'Héritier, but this did not lead to much work. It was the patronage of Empress Joséphine Bonaparte (1763–1814) with her beautiful gardens at Malmaison and Navarre and Redouté's appointment in 1805 as her painter of flowers that enabled him to produce some of the most beautiful flower-plate books of the period. The magnificent folios published under Joséphine's sponsorship contain most of the finest color plates of Redouté's career: his Les Liliacées and Les Roses; Étienne Pierre Ventenat (1757–1808), Jardin de la Malmaison (Paris, Crapelet, 1803–1804[–1805]); and Aimé Bonpland (1773–1858), Description des Plantes Rares Cultivées à Malmaison et à Navarre (Paris, Didot, [1812–]1813[–1817]).

Pierre-Joseph Redouté succeeded van Spaendonck upon his death in 1822 to the newly appointed joint position as maître de dessin—drawing master for iconography for botany—in 1823 at the Muséum National d'Histoire Naturelle. Redouté painted over 600 of the vélins for the collection, and his popular classes and lectures over the next 16 years were well attended. His work for private collectors sold well, and he quickly adjusted when it became necessary to find new patronage from each of the ruling monarchs after Napoléon's abdication. Despite that income he never could keep up with his extravagant life-style, which included the upkeep of his country estate, and struggled financially in his later years. He died in 1840 with many honors but in poverty.

As an artist Redouté was expert in both watercolor and engraving, producing prints of his work that equaled his paintings in quality. In many of Redouté's publications the techniques of printing stipple engravings in color (à la poupée), which he claimed to have invented, were utilized. He employed stipple and roulette work to perfect the texture and tonal variation of his plants and then printed in color by applying the inks directly to the plate with a wad of fabric. It was discovered that best results for this type of printing were found on plates that were well worn, so several black prints would be run before the colored versions. Redouté saw an opportunity in this and published the black prints alongside the colored versions in special issues of his publications. For these prints Redouté used ochre paper because the contrast of black ink on white or cream paper was much too harsh while the ochre acted as a mid-tone that more closely matched the subtle tonal shifts found in his colored work. He also produced watercolor work using a technique called grisaille, or painting all in shades of gray, likely as a precursor to his engravings. This preparatory work emphasized tone as well as volume and dimensionality in his plant subjects and was very helpful in rendering realistic finished paintings and prints.

Thumbnails of the Redouté images have been added to the Catalogue of the Botanical Art Collection at the Hunt Institute database. To locate these images in the database, search on the artist's last name. To inquire about publishing these images, please contact the Art Department.

The first formal exhibition at the Hunt Botanical Library was Exhibition of Redoutéana, a survey of the artworks, archival materials and published illustrations of Redouté collected by Rachel Hunt over her lifetime. In the last year of her life Rachel continued to acquire works by Redouté, as the artist she most highly admired and in anticipation of this exhibition; however, she died just months before the exhibition opened to the public on 21 April 1963. The accompanying Catalogue of Redoutéana contains extensive biographical and bibliographical information as well as descriptions of the artwork and manuscripts. The Institute also has included work by Redouté in numerous other exhibitions and their accompanying catalogues over the years, including Nosegays and Bouquets: Flower and Fruit Arrangements in Western Art (1981), Cacti and Succulents (1982), Flora Portrayed (1983), Printmaking in the Service of Botany (1986), Orchids from the Hunt Institute (1990), Pretty Deadly: Poisonous Plants of Forest, Field and Garden (1991), Ensigns of the Rainbow Goddess (1993), Gifts of Winter (2000), Botanical Watercolors for the Nationaal Herbarium Nederland (2004), What We Collect: Recent Art Acquisitions (2006), Pancrace Bessa and the Golden Age of French Botanical Illustration (2008), Flora's Lexicon (2011), Botany and History Entwined: Rachel Hunt's Legacy (2011), Duets (2014) and Dangerous Beauty: Thorns, Spines and Prickles (2014). We also loaned Redouté works to the Andy Warhol Museum for its 2004 exhibition Flowers Observed, Flowers Transformed.

The Pierre-Joseph Redouté papers, Hunt Institute Archives collection no. 33, include additional items, such as letters, invoices and receipts.

Our Library holds 22 titles illustrated by Pierre-Joseph Redouté along with some later editions and a few second copies that were in Rachel Hunt's library and additional works acquired following her death in 1963. 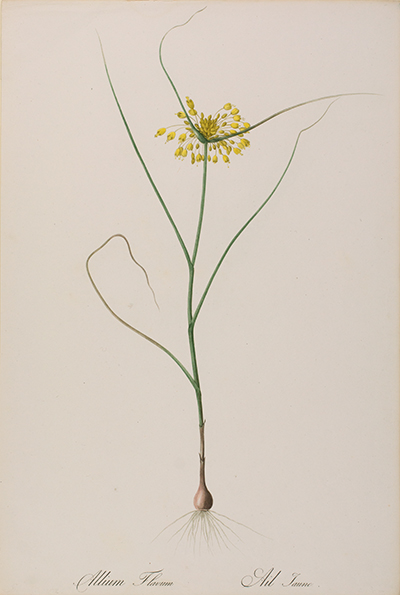