Many people know the work of Luxembourg-born botanical artist Pierre-Joseph Redouté (1759–1840) primarily through the books that reproduce his work. Our founder Rachel Hunt collected many of his publications, and several additional titles were added to our Library after her passing. Rather than focusing on Redouté's well-known, large, floral books, we look at some earlier and less widely known publications. Seven examples are highlighted to discuss how some of his commissions and collaborations came about and to show different aspects of his artistic development.

Not long after Redouté moved to Paris in 1782, he was befriended by French botanist Charles Louis L'Héritier de Brutelle (1746–1800), who had seen Redouté drawing in the Jardin du Roi (nationalized and renamed the Jardin des Plantes in 1793) and decided to offer him botanical instruction so that he could illustrate L'Héritier's botanical works. Also around this time Redouté received training in painting and stipple engraving from botanical artist Gérard van Spaendonck (1746–1822), leading to an appointment at the Jardin. In his first years in Paris Redouté also studied with Gilles-Antoine Demarteau (1750–1802) to learn engraving and color printing. These three sets of trainings gave Redouté a suite of additional skills that helped him to fully shape his talent toward botanical art.

In addition to his work for L'Héritier and the Jardin, Redouté's art and growing reputation attracted further opportunities through the network of botanists, horticulturists and plant collectors in and around Paris. L'Héritier had introduced Redouté to many of his own botanical contacts, some officially connected with the Jardin, and others part of informal circles that sometimes overlapped with the Jardin network. Such connections benefited Redouté and led to his contributions to a wide range of projects. Several royal appointments also led to further connections and opportunities.

Redouté's first professional assignment in botanical illustration was illustrating L'Héritier's Stirpes Novae (Paris, Pierres, 1784–1785 [1785–1805]). L'Héritier had a particular interest in the systematic study of exotic plants, evident in his publications. Geraniologia (Paris, Didot, 1787–1788[–1792]) was issued as a collection of plates without text—some after drawings done when Redouté was in England with l'Héritier—illustrating geranium and pelargonium species. As was typical for Redouté's early published work, the plates were line engravings. Our Library holds an incomplete copy with 33 of the 44 plates.

L'Héritier's Sertum Anglicum (Paris, Didot, 1788 [1789–1792]) was a different kind of work, the product of a surreptitious and serendipitous trip to England. L'Héritier had been given the herbarium specimens collected by Joseph Dombey (1742–1794)—a French explorer who received permission from the Spanish government to collect plants in its South American colonies—and was asked to identify and describe them for France but then found that the Spanish government was also claiming the specimens. Faced with an imminent deadline to turn over the herbarium to Spain, L'Héritier instead smuggled it out of France and fled to England and the home of Joseph Banks (1743–1820), hoping to complete the work there. Instead, he was distracted by new, exotic plant specimens growing in the Royal Gardens at Kew (now the Royal Botanic Gardens, Kew) and turned his attention to identifying and describing some of those. He sent for Redouté, who joined him and drew plants that L'Héritier was studying. The result of their time there in 1786–1787 was published as Sertum Anglicum.

In the 1790s and early 1800s Redouté also illustrated several floristic publications by natural history explorers. One of these was Icones Plantarum Syriae Rariorum ... (Paris, Impensis Auctoris, Prévost, etc., 1791–1812) by botanist and explorer Jacques-Julien Houton de Labillardière (1755–1834). Early in his career Labillardière was befriended by René Louiche Desfontaines (1750–1833), a botany professor at the Jardin, who introduced him to a number of botanists in Paris, including L'Héritier, who may have introduced him to Redouté. Such connections led to Redouté's working for or with a number of botanists. Although Labillardière is better known for his work on the flora of Australia, his early fieldwork was in the Middle East. His flora of the Syria region contained 50 uncolored engravings, including illustrations by both Redouté and his brother Henri-Joseph Redouté (1766–1852), among others.

As Redouté's career progressed, his contributions to publications became more prominent. In this next example, he was commissioned to make the illustrations even before a botanical author had been selected. L'Héritier had a longtime interest in producing an illustrated monograph on succulent plants. He asked Redouté to paint succulent plants growing in the garden of Jacques-Martin Cels (1743–1806) and in some other gardens. Cels was an important contact who had a well-established plant nursery including many exotic species and who was part of a circle around Jean-Jacques Rousseau (1712–1778). For the plant descriptions, Desfontaines recruited the young Swiss botanist Augustin-Pyramus de Candolle (1778–1841), who was studying at the Jardin. The resulting publication was Plantarum Historia Succulentarum / Histoire des Plantes Grasses (Paris, Dugour et Durand, 1798 [1799–1805, 1829–1837]).

This work on succulent plants was de Candolle's first professional publication. It was also the first work in which Redouté's process of creating illustrations and reproducing them as color-printed stipple engravings was used throughout and the only work in which he did all of the engraving. L'Heritier had suggested that Redoute use his new process for this work as a way to show critical details of succulent plants that are difficult to see in dried specimens. Redouté's name received top billing on the title page with de Candolle's in smaller font beneath. Publication was interrupted in 1805 due to a quarrel between de Candolle and the publisher and was not resumed until 1829 for only a few more fascicles.

Redouté contributed illustrations to several works on North American trees by André Michaux (1746–1802) and his son, François-André Michaux (1770–1855). French botanist, explorer and plant collector André Michaux traveled and collected in the Middle East for three years and then spent a decade in North America on a scientific mission authorized by Louis XVI of France (1754–1793). There Michaux identified and collected potentially useful plants, especially trees, that might be naturalized in France for ornamental plantings and for reforestation and timber for shipbuilding and other construction. Michaux established two gardens in New Jersey and South Carolina where he grew specimens that he collected before sending them to France. When he returned to France, he produced two publications on North American trees as part of this work—with nearly all illustrations by Redouté—and leaving the final editing and publishing arrangements to his son, André joined an expedition to the South Seas in 1801, during which he died in Madagascar. André Michaux' first published work was his book on North American oaks, Histoire des Chênes de l'Amérique (Paris, Crapelet, 1801). François-André Michaux had been with his father in North America and later returned twice on his own to continue exploring the forests, collecting plants and writing his own books on North American trees.

A different kind of project altogether presented itself in Jean-Jacques Rousseau's La Botanique (Paris, Delachaussée & Garnery, 1805). Rousseau was not part of the French botanical establishment, but in his later years he became interested in botany and for a time immersed himself in botanical study. His writings introducing botany to a general audience came out of this period, reflecting his dislike of formal botanical science and his perception of a need for a basic instructional book on botany for beginners. In 1771–1773 he wrote his Lettres Élémentaires sur la Botanique to Mme. Madeleine-Catherine Delessert (1747–1816) in response to her request for basic botanical lessons that she could give to her daughter Marguerite-Madeleine (1767–1838). The Lettres were likely shared with her other children, including Benjamin Delessert (1773–1847), who would later become a botanist. The Lettres were published after Rousseau's death, first in Geneva and London and later in Paris in 1800.

Redouté and Rousseau never met, but during the years of Redouté's botanical training L'Héritier had showed him Rousseau's Lettres and suggested that Redouté consider illustrating it. That idea took a long time to germinate, but eventually in 1805 two new editions of Rousseau's work were published in folio, re-titled La Botanique and illustrated by Redouté, one edition with sixty-five color-printed, stipple-engraved plates, and the other with uncolored, stipple-engraved plates, which is the edition in our Library.

In addition to all of his botanical contacts, Redouté was fortunate to have the support of several among the royalty and nobility of France. He first came to the notice of Queen Marie Antoinette (1755–1793), who appointed him draughtsman and painter to the cabinet of the queen. Later, Empress Joséphine Bonaparte (1763–1814), wife of Napoléon Bonaparte (1769–1821), appointed him to the salaried position of her official painter. Napoleon's second empress, Marie-Louise (later Marie Louise, Duchess of Parma, 1791–1847), also invited Redouté to be her painting teacher. In addition he gave painting lessons to many in the nobility. Of all of these, Joséphine had the greatest impact on his life and work.

Redouté contributed to two floral publications created specifically about Joséphine's gardens at Malmaison and Navarre. One was Le Jardin de la Malmaison (1803–1804[–1805]), written by Étienne Pierre Ventenat (1757–1808), whom Joséphine had hired to identify and describe new plant species in her gardens, and illustrated by 120 colored stipple engravings by Redouté. After Ventenat's death, Aimé Bonpland (1773–1858) was appointed to supervise the garden and publish a continuation, Description des Plantes Rares Cultivées à Malmaison et à Navarre (Paris, Didot, [1812–]1813[–1817]), which contained 55 plates by Redouté and 9 by Pancrace Bessa (1772–1835). Bonpland had studied botany in Paris, and he explored Latin America in 1799–1804 with Alexander von Humboldt (1769–1859) before coming to work at Malmaison.

Finally, we must mention Redoute's most famous books, the magnificent, large-format floral works that recorded roses, lilies and other garden flowers growing at Malmaison and other gardens in and around Paris. These are Les Liliacées (Paris, Didot, 1802–1808[–1816]), his and Claude-Antoine Thory's Les Roses (Paris, Didot, 1817–1824), and Choix des Plus Belles Fleurs et des Plus Beaux Fruits (Paris, Panckoucke, 1827–1833). All were illustrated by Redouté with color-printed and hand-retouched stipple engravings.

In Les Liliacées Redouté presented 486 plates illustrating lilies, irises, bromeliads and other garden plants. The work was created with Joséphine's sponsorship, and the only name to appear on the title page was Redouté's, who was artist, editor and publisher. Containing 169 rose portraits, Les Roses may be his best-known work. In our copy the color plates were bound opposite uncolored prints on ochre paper, highlighting two views of each engraving: the color-printed flower and the unadorned stipple engraving. Choix des Plus Belles Fleurs et des Plus Beaux Fruits contained 144 color plates showing familiar garden flowers and fruits; ours is the 1829 folio edition.

The first formal exhibition at the Hunt Botanical Library was Exhibition of Redoutéana, a survey of the artworks, archival materials and published illustrations of Redouté collected by Rachel Hunt over her lifetime. In the last year of her life Rachel continued to acquire works by Redouté, as the artist she most highly admired and in anticipation of this exhibition; however, she died just months before the exhibition opened to the public on 21 April 1963. The accompanying Catalogue of Redoutéana contains extensive biographical and bibliographical information as well as descriptions of the artwork and manuscripts.

The Pierre-Joseph Redouté papers, Hunt Institute Archives collection no. 33, include additional items, such as letters, invoices and receipts.

Our Art Department has 143 artworks by Pierre-Joseph Redouté, including line and stipple engravings, pencil drawings and watercolor paintings.

For thumbnails of the Redouté images, see the Catalogue of the Botanical Art Collection at the Hunt Institute database. 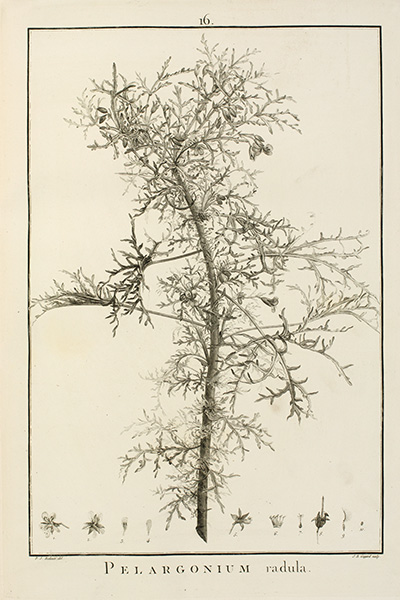