This exhibition included artworks and books that depicted the formidable and yet beautiful defensive structures of thorns, spines and prickles that have evolved to protect plants from predation. Featured were drawings, watercolors, prints and books displaying thistles, teasels, cacti, roses, berry brambles, stinging nettles and citrus trees.

How many times have you cursed the hidden dagger in your bouquet of roses, delicately reached through the treacherous bramble to pick the perfect raspberry or marveled at the scale of the monstrous needles covering a tiny cactus? These structures are the first line of defense many plants have against hungry herbivorous predators, but their intriguing characteristics are often overlooked. In this exhibition we took a closer look at the beauty of these frightful weapons and the artworks that revealed them.

The first step in appreciating these defensive structures is an understanding of what they are and how they differ from each other. In the most basic sense, thorns, spines and prickles can all refer to the sharp, stiff, woody defensive appendages found on some plants. Thorns are modified stems, as in Citrus Linnaeus. Spines are modified leaves, as in Echinocactus Link & Otto. Prickles differ in that they emerge from the epidermis, mesophyll or cortex of the plant, as in Rosa Linnaeus. Examples of these structures were depicted in a variety of ways, from detailed scientific illustrations to loose interpretations, but all showing how beautiful these structures can be.

On Thursday, 18 September 2014, 5–7 PM, we held an opening reception. At 5:30 PM Assistant Curator of Art Carrie Roy gave a short introduction to the exhibition in the gallery.

We were open on Saturday, 11 October, 1–4 PM, during Carnegie Mellon University's Cèilidh Weekend festivities. Docent–led tours were available throughout the afternoon.

On display during fall 2014 in our Cabinet of curiosities located in the lobby were books from the Library collection featuring plants with thorns, spines and prickles. Humans are often undeterred by these sometimes pain-inducing plant features, finding that their sharpness can serve a purpose or that the plant is useful despite the pricks and jabs one might incur. The Cabinet explored how these plants have been utilized. 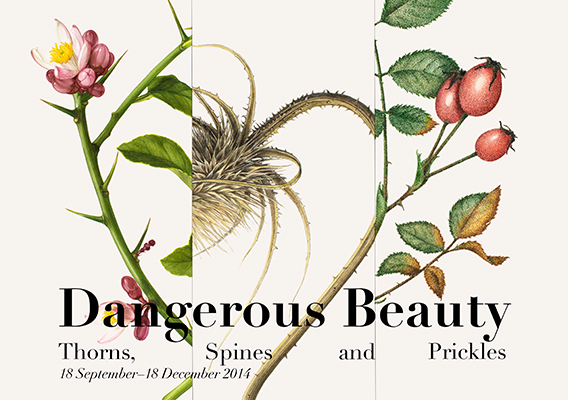