The Bibliography Department locates and examines information on botanical literature in order to systematically organize and publish it for further scholarship. As such, the department maintains expansive data files (243,000+) on the history and bibliographical documentation of botanical literature.

A history of the Bibliography Department could perhaps best be shown by briefly outlining the organizing central project of the department—a planned multivolume encyclopedic work that was to be named Bibliographia Huntiana (BH). The BH project originated from a suggestion made in 1961 by Dutch botanist Frans Stafleu (1921–1997) for the creation of a "new Pritzel." Georg August Pritzel's (1815–1874) Thesaurus Literaturae Botanicae, ed. 2 (1872) remained the most correct and useful bibliography on botanical literature for well over a century after its publication and still today is a uniquely valuable bibliographic reference work. Stafleu, at the Library as a member of the advisory committee, suggested replacing Pritzel's seminal work with one vastly more robust and comprehensive. Rather than merely a standard bibliographic index, BH was intended to be a comprehensive annotated guide to all of the botanical literature published between the dates of 1730 and 1840, including substantive information on the authors, review articles, translations, multiple editions, announcements, etc. The earlier date was chosen to include all the works of Carolus Linnaeus (1707–1778), whose work marked the beginning of modern botanical scholarship. The later date is roughly coincident with the advent of mass-production printing and the consequent achievement of greater uniformity in the production of books, together with a rapid increase in the rate at which new titles and editions appeared, and increasing specialization among botanists, and a concurrent division of botany into various increasingly autonomous sub-disciplines. The resulting span of 110 years represents a most important period in botanical history, one characterized mainly by the pursuits of classification and exploration.

The BH project commenced in 1965 and was expected to take 15 years, yielding an 18-volume work. Documenting 15,000 books, 940 periodical titles, and an unspecified number of periodical articles, representing the output of approximately 4,000 authors, it would provide a definitive bibliography of botanical literature. However, due to many factors the initial goals of the BH project were never realized in full as envisioned. Changes in staff and the subsequent restructuring of the project's intent (expansions of scope, etc.) caused recurring delays.

While the BH project was never completed as intended, the project was reconfigured over time and carried forward as a group of smaller projects. In the decade spanning 1963–1973, the Bibliography Department was well staffed and in the midst of a rigorous period of data collection in support of BH. Libraries, botanical gardens, museums, private collections and all manner of research facilities from Leningrad, Madrid, Sendai, Pune, Vienna, London, Jamaica Plain and Berkeley (just to name a few locations) were scoured for any works containing botanical subject matter. This data would be transcribed and mailed back to the Hunt Botanical Library on special forms denoting the type of information they contained.

In 1971 the Hunt Botanical Library was renamed and reorganized into four distinct program departments. In some regards, this development was effectuated by the large accumulation of bibliographic datasets that were intended to populate BH. While there was always an archive at the Library, the biographical subset of BH data became the bedrock of the Hunt Institute Archives, which focuses on botanical biography and portraiture and is a manuscript repository as well as our institutional archive.

One of the subsets that has been published as a stand-alone reference work is BPH. Originally published by the Hunt Botanical Library as Botanico-Periodicum-Huntianum in 1968, BPH was a bibliography of periodical literature published from 1665 to the present. It was compiled and edited by George H. M. Lawrence, Günther Buchheim, Gilbert Daniels and Helmut Dolezal. A supplement to this work, B-P-H/S: Botanico-Periodicum-Huntianum/Supplementum, was completed in 1991 by Gavin D. R. Bridson (1936–2008), who came to the Library in 1982 from the Linnean Society of London as the Institute's Bibliographer and Senior Research Scholar, a position he held until his death in 2008. BPH-2: Periodicals with Botanical Content was published in 2004 (Bridson et al., 2004). This work was a major upgrade from the first edition and supplement, nearly tripling the indexed titles. Current Bibliographer Donald W. Brown (assistant librarian, 2002–2003; assistant librarian & assistant bibliographer, 2003–2010; bibliographer, 2011–) databased the print version as BPH Online and continues to add new titles.

While certain subsets of the datasets compiled in the early days of the Institute have been published or otherwise made available, certain other facets remain (though heretofore unpublished) viable and still relevant treasures. The data collected for the BH project lives on, will be validated, corrected and revised, merged with new information, and presented in new forms in the coming years.

The BH Flora subset, culled predominately from the original BH files, is now available. The Floras database is a searchable bibliography that indexes and organizes distinct data elements of nearly 4,000 titles of the world's floristic literature published in the period 1730–1840. The Floras database, like BPH Online, is free and accessible to all. 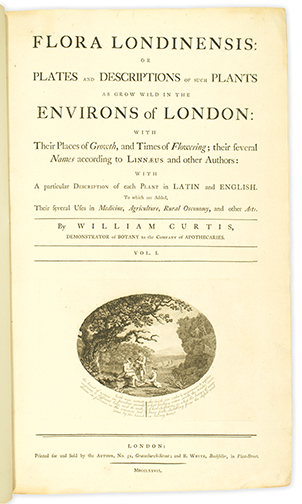