The Bibliography Department maintains comprehensive data files (243,000+) on the history and bibliography of botanical literature. Data files include the following: 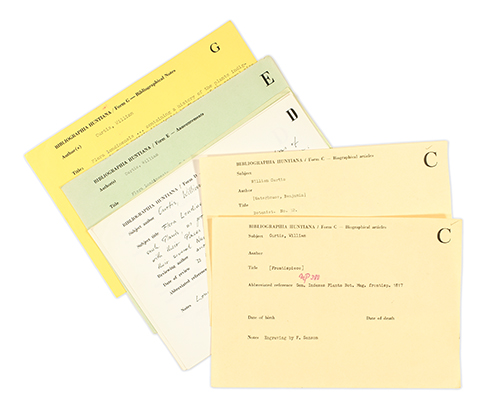 Shown here is a note regarding the W. J. Hooker edition of Flora Londinensis, indicating that it was cited in the Bradley Bibliography by Alfred Rehder (under the direction of C. S. Sargent) printed by the Arnold Arboretum in 1901.

Shown here is an Announcement citation of Curtis' Flora Londinensis from the Sammlung der Deutschen Abhandlungen, welche in der Königlichen Akademie der Wissenschaften zu Berlin vorgelesen würden in den Jahren (Berlin, 1799). Interestingly, it includes a note that the publication of Flora Londinensis will desist as Curtis had become "dangerously ill."

Shown here is a review citation of Curtis' Flora Londinensis of an anonymous review published in the journal Nürnbergische Gelehrte Zeitung (Nuremberg, 1778).

Shown here are two biographical article citations regarding William Curtis. The first is a biographical account of Curtis and his garden from the 1805 [Oct.] volume of the Monthly Anthology, or Magazine of Polite Literature (later ..., or Massachusetts Magazine; later ..., and Boston Review, Containing Sketches and Reports of Philosophy, Religion, History, Arts and Manners). This was one in a series of essays titled the "Botanist" that was collected and published in 1811 by Benjamin Waterhouse as The Botanist.... The second citation is referencing a frontispiece portrait engraving by Francis Sansom (the main engraver of the Botanical Magazine) in the General Index to the Plants Contained in the First Forty-Two Volumes of the Botanical Magazine in Two Parts (London, 1817).