Rachel Hunt collected over 1,300 botanical watercolors, drawings and prints, predominantly from the period of 1730 to 1840, with the objective of owning original artworks by every artist whose published work was in her collection of botanical books. In the early days of the Hunt Botanical Library, a survey was made to determine the extent and character of similar botanical art collections at other botanical centers in the United States and abroad. Because historical material was relatively well represented at a number of other institutions (mostly European and a few American ones), the decision was made to pursue instead the acquisition of contemporary works, which remain a specialty of the Art collection today. Modern botanical art and illustration was often not retained by publishers and seldom collected by institutions, initiating a fear that this valuable record would be lost to history.

With this collecting interest in mind, the Institute established the International Exhibition of Botanical Art & Illustration series in 1964 with the hope of supporting and encouraging contemporary botanical artists. Collectively, the International series catalogues are the most comprehensive record available of contemporary botanical artists and illustrators with individuals represented now totaling 1,212, and many of their artworks, often through generous donation by the artist, are in the permanent collection. At every International opening since 1995, we have collaborated with the American Society of Botanical Artists (ASBA) and have given talks, tours and displays of special collection items catered to specific requests. Since 2001 our collection has been a valuable resource for their local chapter, Allegheny Highlands Botanical Art Society (AHBAS).

The Art Department continues to acquire significant historical collections, such as the Torner Collection of Sessé and Mociño Biological Illustrations, which includes 1,989 botanical and zoological watercolor illustrations made during the Royal Spanish Exploring Expedition of 1787–1803; the United States Department of Agriculture Forest Service Collection of 2,884 ink drawings and the Hitchcock-Chase Collection of Grass Drawings (on indefinite loan from the Smithsonian Institution). Illustrations for floras, monographs and economic botany works also are an important part of this department's holdings. Art collection data can be accessed on the Hunt Institute's online database, and images continue to be added.

The Art Department organizes exhibitions featuring historical and contemporary works from the permanent collection or those on loan from artists, collectors or institutions, as well as a revolving sequence of International travel exhibitions for loan to museums, galleries and botanical gardens. The relationships that continue to be developed with living artists through these exhibitions often have resulted in the disposition of larger bodies of their work into our permanent collection. This has enabled the Hunt Institute to not only strengthen our collection with some of the best examples of botanical art being produced but also, in the spirit of Rachel Hunt's original intent, to be a valuable source of inspiration and a research center for artists, scholars and the general public by retaining an important history of plants represented through the centuries in watercolor, drawings and prints. Under the stewardship of three Hunt Institute Art curators—John V. Brindle (1911–1991; curator, 1961–1981; curator emeritus, 1981–1991), James J. White (1941–2011; assistant curator, 1978–1981; curator, 1982–2010; curator emeritus, 2010–2011) and Lugene B. Bruno (assistant curator, 1996–2009; acting curator, 2009–2010; curator, 2010–)—the Art collection has grown from Rachel Hunt's original 1,300 watercolors, drawings and prints to 32,413 items. 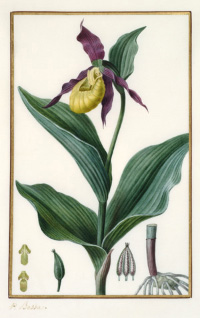