Pancrace Bessa and the Golden Age of French Botanical Illustration

The Hunt Institute exhibited a selection of watercolors and prints by the French botanical artist Pancrace Bessa (1772–1846). In this golden age of natural history science, many new plants arrived in France to be cultivated in the botanical gardens of the Muséum National d'Histoire Naturelle, of the royals and of the aristocracy. These new plants required classification, description and illustration. Bessa painted flowers and fruits for some of the most important collections and botanical publications of the early 19th century, taught painting and exhibited at the Paris Salon.

Pancrace Bessa studied at the Muséum National d'Histoire Naturelle in Paris (commonly known as the Jardin des Plantes) where he came under the artistic influence of the master botanical artist and chair of iconography Gérard van Spaendonck (1746–1822) and the famous flower painter Pierre-Joseph Redouté (1759–1840)—with whom it is thought he directly studied. Bessa was hired as a peintre des fleurs to portray rare plants for the famous collection of vélins—the paintings on vellum begun in the mid-17th century for Gaston d'Orleans, inherited by Louis XIV and transferred to the Jardin du Roi—that was nationalized and renamed the Muséum National d'Histoire Naturelle in 1793. The Muséum was an internationally recognized center for research in the natural sciences with a staff of the leading French botanists and artists and a strong relationship with the Académie Royale des Sciences in Paris.

Through the connections he made at the Muséum, Pancrace Bessa illustrated some of the most important botanical publications by the leading French botanists, horticulturists and agriculturists of the day, portraying new species of fruits, flowers and trees from the Americas, Africa, Asia and Australia. For some works he was the sole illustrator, and for others he collaborated with talented artists of the day, such as his teacher Pierre-Joseph Redouté. Many of Bessa's original paintings were reproduced using the technique of stipple engraving (a printmaking method using a series of dots to create subtle tonality that was perfect for portraying plants).

Bessa painted the originals for one of the most important French periodicals of the period—Mordant de Launay's (and later Loiseleur-Deslongchamp's) Herbier Général de l'Amateur (Paris, [1810–]1816–1827)—depicting in watercolor on vellum 572 rare and new plants growing in the gardens of Paris. Bessa was also a teacher of flower painting, and one of his pupils was also his patroness—the Duchess du Berry, sister-in-law of Charles X. The king purchased all of the originals for the Herbier as a gift for the duchess. After their original purchase in 1826, this collection of Bessa's watercolors began a convoluted journey from France to Brazil—via the Duchess du Berry's sister, the second Empress of Brazil; two directors of the botanical garden of Rio de Janeiro; and a director's daughter—to their eventual international dispersal at an auction in 1947 in the United States.

After 60 years, 11 of Pancrace Bessa's original watercolors for the Herbier Général de l'Amateur were reunited in our exhibit—6 from the Hunt Institute collection and 5 on loan from the Warren H. Corning Collection of Horticultural Classics at The Holden Arboretum in Kirtland, Ohio. Pittsburgh's Rachel McMasters Miller Hunt (1882–1963) and Cleveland's Warren H. Corning (1902–1975), the purchasers of these artworks, were prominent 20th-century collectors of rare botanical books and artworks who later used their private collections to create major research libraries for the public. (See a special color issue of our Bulletin featuring the artworks.)

About The Holden Arboretum

Established in 1931 on a 100-acre parcel donated by Roberta Holden Bole, The Holden Arboretum in Kirtland, Ohio, has grown to 3,500 acres, making it one of the country's largest arboreta. The Warren H. Corning Collection of Horticultural Classics housed in the Rare Book Room of the Corning Library was mainly assembled from 1940 through 1975 by Warren H. Corning, a Cleveland philanthropist and investment banker who was a long time trustee and served as the first unpaid executive administrator of The Holden Arboretum. 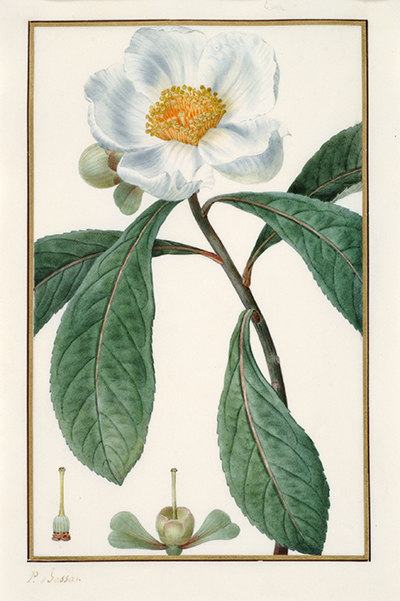