Pancrace Bessa (1772–1846) was one of the most notable natural history artists in France in the 19th century. Over the centuries his reputation has been overshadowed by the reputations of his two greatest influences—Gérard van Spaendonck (1746–1822) and Pierre-Joseph Redouté (1759–1840). Bessa was born in Paris on 31 December 1771 or 1 January 1772 to the civil servant Nicolas Françoise Bessa and Marie-Caroline Texier. There were no records of where or with whom Pancrace Bessa studied or apprenticed in his early years, but he developed an affinity and passion for portraying the natural world. Bessa studied with van Spaendonck at the Jardin du Roi (that was nationalized and renamed the Muséum National d'Histoire Naturelle in 1793) and with Redouté in his private studios in Paris. From 1806 Pancrace Bessa regularly exhibited at the Paris Salon, winning a medal in 1808. Charles Paul Landon, who reviewed the exhibits in his Annales du Musée et de l'Ecole Moderne des Beaux-Arts, thought Bessa's work rivaled that of Redouté's, finding they both approached their subjects with lightness, grace and nuance. Bessa's work also was highly regarded and collected by royalty and foreign sovereigns. His work found a diverse audience of botanists, horticulturists, amateur naturalists, gardeners and young ladies interested in poetry and the beauty of nature. In 1823 Bessa was officially hired as a peintre des fleurs to portray rare plants for the famous collection of vélins—the paintings on vellum begun in the mid-17th century for Gaston d'Orléans, inherited by Louis XIV and transferred to the Jardin. Bessa's watercolors on vellum rivaled the work of his predecessors, including van Spaendonck and Redouté.

Through the connections he made at the Jardin du Roi, Pancrace Bessa illustrated some of the most important botanical publications by the leading French botanists, horticulturists and agriculturists of the day, portraying new species of fruits, flowers and trees from the Americas, Africa, Asia and Australia. For some works he was the sole illustrator, and for others he collaborated with talented artists of the day, such as his teacher Pierre-Joseph Redouté. Many of Bessa's original paintings were reproduced using the technique of stipple engraving, a printmaking method using a series of dots to create subtle tonality, which was perfect for portraying plants. Pancrace Bessa was fortunate to learn the art of stipple engraving from both Gérard van Spaendonck and Pierre-Joseph Redouté.

Bessa was also a teacher of flower painting, and one of his pupils was also his patroness—Marie Caroline Ferdinande Louise, duchesse de Berry (1798–1870), a patroness of the arts. She appointed Pancrace Bessa her painter of flowers in 1816, the year she married Charles Ferdinand, duc de Berry (son of Charles X). On 3 April 1820 she began taking painting lessons with Bessa, and she so admired his talent that Charles X (1757–1836) gave Bessa's original paintings for Herbier Général de l'Amateur to the duchesse for a new year's gift in 1826. During the July Revolution in 1830, Charles X went into exile, and the duchesse also left France, returning to her family home in Naples. The duchesse most likely gave the Bessa paintings to her sister Teresa Christina Maria de Bourbon, princess of the two Sicilies (1822–1889), for safekeeping. After their original purchase in 1826, this collection of Bessa's watercolors began a convoluted journey from France to Brazil—via the duchesse de Berry's sister, the second empress of Brazil; two directors of the botanical garden of Rio de Janeiro; and a director's daughter—to their eventual international dispersal at an auction in 1947 in the United States.

After Bessa's patroness the duchesse de Berry went into exile for the second time in 1832, he was no longer under her protection. Sixty years old at the time, he decided to leave Paris and retire to Ecouen. The specifics are not known of Bessa's life in Ecouen, and he died in 1846.

Thumbnails of the Bessa images have been added to the Catalogue of the Botanical Art Collection at the Hunt Institute database. To locate these images in the database, search on the artist's last name. To inquire about publishing these images, please contact the Art Department.

The Hunt Institute has included work by Pancrace Bessa in numerous exhibitions and their accompanying publications over the years, including Cacti and Succulents (1982), Flora Portrayed (1983), Printmaking in the Service of Botany (1986), Orchids from the Hunt Institute Collection (1990), Virtues and Pleasures of Herbs through History: Physic, Flavor, Fragrance and Dye (2007), Flora's Lexicon (2011) and What We Collect: Recent Art Acquisitions, 2007–2012 (2013). Pancrace Bessa and the Golden Age of French Botanical Illustration (2008) reunited artworks from Bessa's Herbier Général de l'Amateur from the collection of the Hunt Institute and the Warren H. Corning Collection of Horticultural Classics at the Holden Arboretum in Kirtland, Ohio. 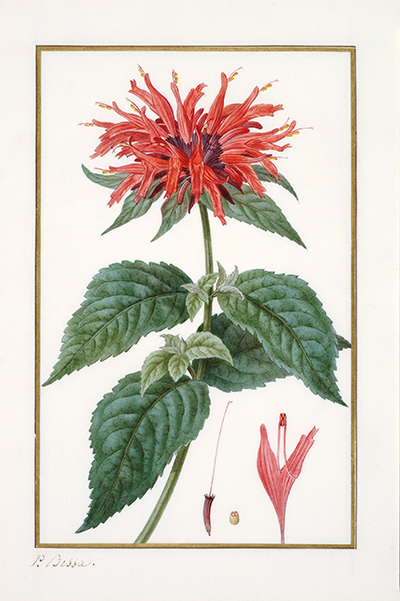