This selection of recent acquisitions to the Art Department of the Hunt Institute, from the early 19th century through the present, was placed in the context of the Institute's collection practices and the history of botanical illustration. Whether working alongside botanists for scientific and horticultural publications or preparing artworks for collectors, galleries or commercial use, artists throughout the centuries have added their individual perspectives to portraying plants and have made lasting contributions to the botanical record and the history of art.

Images of plants, sometimes including details and cross-sections, appeal to the generalist attracted to the contemplative beauty of plants, the naturalist interested in the intricacy of plant structure or the artist inspired by the inherent design in nature. These artworks have been used to illustrate floras, monographs, scientific or horticultural journals or have been prepared for exhibitions. Included were original illustrations for an early-19th-century botanical handbook and its contemporary, the field guide; a 19th-century classroom wall chart and the modern text book; a 20th-century seed packet and a booklet on seedling identification; a 20th-century monograph on the mistletoe genus and a journal article on marine fungi; drawings and watercolors illustrated by research botany professors; independent projects on floras of a region, native and medicinal plants and plants and their pollinators; and recent botanical artworks by artists previously represented in Hunt Institute's International Exhibition of Botanical Art & Illustration series. Mediums represented were watercolor on paper and vellum; ink, graphite and charcoal drawing; printmaking techniques: copper etching, wood engraving, vitreography and nature printing; and gelatin silver photography.

In conjunction with What We Collect: Recent Art Acquisitions, 2007–2012, the Hunt Institute held its annual Open House on 23 and 24 June. We offered talks, tours and opportunities to meet one-on-one with our staff to ask questions and see items in the collections. On 23 June Curator of Art Lugene B. Bruno presented "Botanical wall charts" about the Hunt Institute's collection of instructional wall charts that were produced in Europe and circulated around the world from the late 19th to the early 20th centuries. On 24 June in "From field to folio: Stories behind botanical publications" Assistant Librarian Jeannette McDevitt displayed some of Hunt Institute's special items and spoke about the dramas, disasters and absurdities that went on behind the scenes before these beautiful books could come to fruition. 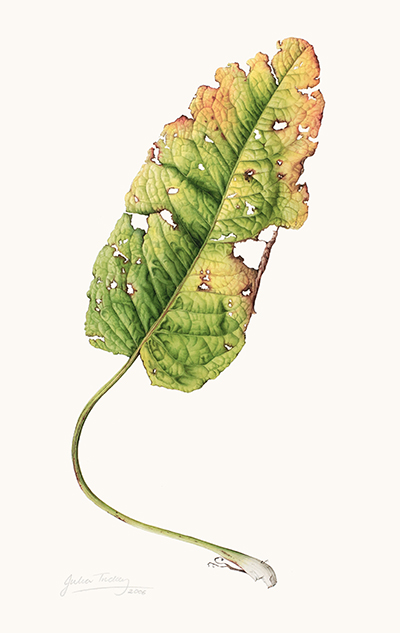