Virtues and Pleasures of Herbs through History: Physic, Flavor, Fragrance and Dye

Through history the virtues and pleasures of herbs have enhanced our daily lives and connected us to the natural world through all of our senses. Although botanists consider an herb to be a small seed-bearing, non-woody plant that dies back to the ground, for this exhibition we used the broader horticultural description of any plant that is useful for many purposes. From the countless cultivated or wild herbs with overlapping applications, we chose a selection within the four categories of physic, flavor, fragrance and dye. Each topic provided highlights of the usage of five herbs at specific points in history. For physic—comfrey, ginger, mint, sage and thyme—we discussed herbs that were considered a panacea for health in ancient medicinal texts, those that continue to be used for their therapeutic properties as in earlier times, and those with components that are considered medicinally promising or now deemed toxic. For flavor—basil, coriander, fennel, garlic and marjoram/oregano—we discussed herbs now used to enhance our culinary pursuits that were once only used symbolically, were reviled for their pungency, or were introduced from other cultures. For fragrance—lavender, monarda, rosemary, scented geraniums and southernwood—we discussed herbs that were used for the first perfumes, as protectors from the plague, and as substitutes for imported teas following the Boston Tea Party. For dye—bloodroot, madder, saffron, tansy and woad—we discussed familiar European herbs that were cultivated in colonists' kitchen gardens for everyday use in the New World and unfamiliar herbs about which they learned from Native Americans, those that were part of the powerful Italian dye and woolen guild systems, and those that strongly affected economies and trade. All twenty herbs were illustrated by original watercolors and prints, rare books or manuscript pages from the Hunt Institute's Art, Library and Archives collections. A selection of items from the original exhibition has been incorporated into an exhibition online.

Ancient medicinal traditions of China, India, Egypt and Greece held that herbs contained virtuous properties that could alleviate any health imbalance. Herbs were used not only for medicinal purposes but also to flavor and preserve food, to scent and protect household environments and to dye or stain the skin and textiles. Records of superstitions and more provable usage in manuscript form were copied or translated into various languages and transmitted to many cultures. With the invention of moveable type in the mid-15th century, information became more readily available. Even though the copying of earlier texts persisted, the 15th and 16th centuries brought new ideas about the use of herbs. They were cultivated in monastery and physic gardens for use and study, and later apothecaries became dispensaries of simples (or combinations of herbs) to treat particular ailments. Through voyages of exploration and the establishment of trade routes, exotic herbs and spices became available throughout many parts of the world, and luxuries were no longer restricted to royalty or the wealthiest classes. Kitchen gardens provided households with the herbs necessary for everyday needs. Herbs began to be acknowledged for their nonessential and pleasurable uses as early as the 13th century and proliferated in the 16th century. Pleasure gardens were established for their beauty—emphasizing color, scent and texture—and elaborately designed knot gardens and labyrinths became popular public attractions. Herbs were used for perfumes and nosegays and as symbols in poetry and prose. Interest in the use of herbs has waxed and waned in modern times, but in recent decades there is recognition of the importance of the role these plants play in all aspects of our lives. As the naturalist Henry Beston aptly noted in his 1935 Herbs and the Earth, "A garden of herbs gives more months of garden pleasure and more kinds of pleasure than any other. Its interest is independent of flowers, its fragrances are taken from the first leaf to the last, its uses make it a part of the amenities of the whole year, and its history and traditions touch all nations and all times."

In conjunction with the Virtues and Pleasures of Herbs through History: Physic, Flavor, Fragrance and Dye, the Hunt Institute held an open house on 3 and 4 June 2007. We offered herb-themed talks, a guided gallery tour of the exhibition by our assistant curator of art, tours of our departments and reading room, and opportunities to meet one-on-one with our staff to ask questions and see items in the collections. 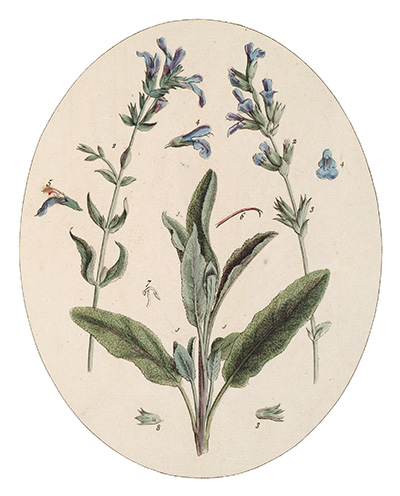