Margaret Ursula Mee (1909–1988) was born in Chesham, Buckinghamshire, England. She studied art in London at St. Martin's School of Art, Center School of Art and Camberwell School of Art. She received a national diploma in painting and design in 1950. In 1952 she moved to Brazil with her second husband, Greville Mee, and taught art for five years in São Paulo's British school. She began working as a botanical artist at the Instituto de Botanica in São Paulo. She explored the Brazilian jungles on numerous expeditions between 1958 and 1964 before concentrating on the Amazonas from 1964 to 1988. She collected plants and painted others on-the-spot. She described her adventures in the following transcript. Her three best-known publications are Flowers of the Brazilian Forests (1968), Flowers of the Amazon (1980) and In Search of Flowers of the Amazon Forest (1988). When Mee died in a car crash in England in 1988, she left behind 400 folios of gouache illustrations, 40 sketchbooks and 15 diaries. The Margaret Mee Amazon Trust was founded in 1988 to preserve her legacy. The trust is dedicated to further education and research in Amazonian plant life and conservation. To this end the trust provides scholarships for Brazilian botanical students and plant illustrators to study in the United Kingdom or conduct field research in Brazil.

Information about the Mee artworks can be found in the Catalogue of the Botanical Art Collection at the Hunt Institute database by searching under the artist's name. However, these works remain in copyright, and images will not be added to the database.

Three of Mee's works appeared in our 2nd International Exhibition of Botanical Art & Illustration (1968–1969). In 1987 the Institute displayed the traveling exhibition, Flowers of the Amazon: Watercolors by Margaret Mee. From 12 May 2005 to 31 July 2005, the Institute displayed the traveling exhibition, The Flowering Amazon: Margaret Mee Paintings from the Royal Botanic Gardens, Kew. 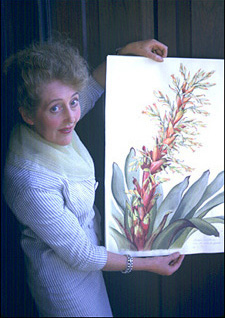