For more than two centuries, the Royal Botanic Gardens, Kew, has recorded in watercolor the blooms, fruits, and foliage of new or rare plants from around the world. The Flowering Amazon was drawn from the rich collection of botanical illustrations preserved in the Kew Archives and featured the exquisite paintings of orchids, bromeliads and other plants by the renowned British artist and explorer Margaret Ursula Mee (1909–1988). Praised by botanists and art critics alike, Mee's works recorded the extraordinary beauty of Amazonia and included several now-extinct species. The Flowering Amazon featured thirty spectacular watercolor drawings and field sketches by Mee, as well as native Brazilian artifacts, plant models and specimen sheets from the Kew Herbarium. Originally exhibited at Kew in a private showing for His Highness Prince Philip, Duke of Edinburgh, the exhibition began its two-year tour of the United States in spring 2004 at the New York Botanical Garden. A limited quantity of the catalogues produced by the Royal Botanic Gardens, Kew, to accompany the exhibition were available at the Institute. In 1987 the Institute hosted another traveling exhibition featuring the work of Mee. For more information about the Institute's Mee holdings, see our Margaret Mee page. 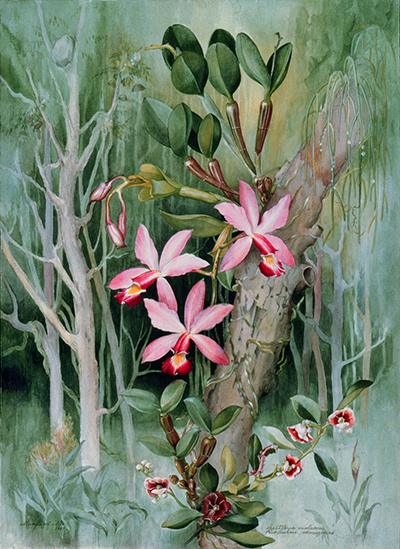