The Michel Adanson Library at Hunt Institute includes the botanical portion of Adanson's personal library, along with correspondence, manuscripts, and a large number of plant illustrations clipped from published sources. Roy A. Hunt purchased this collection for the Hunt Botanical Library in 1961, making additional purchases in 1962. As catalogued in our publication, Adanson: The Bicentennial of Michel Adanson's "Familles des Plantes" (1963–1964), the collection contains 127 book titles, 117 letters, 146 manuscripts and thousands of plant images clipped from published works, many of them annotated by him.

We know a bit about how Adanson built his book collection. In 1739, when he was 12 years old, he won copies of works by Pliny and Aristotle as a reward for his work in Greek and Latin poetry. That same year, he bought a copy of Tournefort's Institutiones Rei Herbariae (Paris, 1700, AD 124). Two of these early acquisitions, the Tournefort book and Pliny's Historiae Mundi Libri XXXVII (Genève, 1631, AD 103), are in our Adanson Library. Adanson annotated both texts throughout. The Tournefort work was bound with another, his Corollarium Institutionum Rei Herbariae (Paris, 1703, AD 124).

During the course of Adanson's studies, he had access to the libraries of several of his teachers. He acquired few books of his own before his voyage to Senegal in 1749. These included the aforementioned work by Tournefort and Linnaeus' Genera Plantarum, ed. [3] (Paris, 1743 [1744], AD 81), and Systema Naturae, ed. 4 (Paris, 1744, AD 86). His interest in botany was strong. In the 1740s he undertook the task of classifying thousands of plant species using Tournefort's system, and he also began a personal herbarium. He annotated his copy of Genera Plantarum in 1744. Another acquisition from this period was his copy of Boerhaave's Aphorismi de Cognoscendis et Curandis Morbis in Usum Doctrinae Domesticae Digesti, bound with his Libellus de Materie Medica et Remediorum Formulis Quae Serviunt Aphorismis de Cognoscendis et Curandis Morbis (both ed. 9, Paris, 1745, AD 20). Inscribed on the inside cover was this note: "Acheté 4 l[ivres] chez Cavelier 1748." Both works were heavily annotated.

Upon Adanson's return to Paris from Senegal, he began working closely with Bernard de Jussieu (1699–1777), under whom he had studied, and among other duties the two were administrators of plants at the Garden Trianon at Versailles. For a time Adanson lived in de Jussieu's home and had access to his library. Among the 14 Linnaean works in the Adanson collection is a copy of the first edition of Species Plantarum (Holmiae, 1753, AD 85), inscribed by Linnaeus to de Jussieu and heavily annotated by Adanson. He presented two papers to the Académie Royale des Sciences and then published volume one of his Histoire Naturelle du Sénégal in 1757. In 1759 he presented a description of the first volume of his Familles des Plantes at a meeting of the Académie, along with some of his general principles of classification. The two-volume work was published in Paris in 1763–1764. The collection here contains a copy of Familles des Plantes in unbound sheets, along with some earlier page proof sheets. The sheets were heavily annotated, possibly as part of the preparation for a second edition, although it was noted in our Adanson catalogue that these sheets were apparently not used in producing the second edition published by Payer.

By virtue of his functions in relation to the Académie, Adanson received numerous publications sent to him for review. He also conducted a considerable amount of correspondence with members of the Académie and with others, and he made regular reports to the Académie. He collected plants locally and conducted experiments on the growth of different varieties of wheat and on grapes and wine production, and he had many correspondents on these and other topics.

In addition to the numerous works received in connection with his work for the Académie, Adanson continued to acquire books on his own, although at times his financial situation was strained. He apparently purchased Plukenet's six-volume Phytographia: Opera Omnia Botanica (London, 1691–1705, AD 104) in 1769, although in a few of these volumes Adanson seems to have replaced his acquisition date of 1769 with 1754. This was one of a number of works in which he annotated the plates, possibly in preparation for adding them to his collection of illustrations. In 1775 he acquired a copy of Kaempfer's Amoenitatem Exoticarum (Lemgovia, 1712, AD 71), which he also annotated. In 1786 he received a copy of Cavanilles' Dissertatio Botanica de Sida (Paris, 1785, AD 28). Inscribed on the title page was the note, "doné le 10 janvier 1786 par Cavanilles abbé." The plates were heavily annotated with names and details. We don't know when Adanson acquired a copy of Parkinson's Theatrum Botanicum (London, 1640, AD 101), but what remains of this work of some 1,767 pages are only pages 1,689–1,720; the rest Adanson cut up for his plate collection.

In the later period of his life, growth of Adanson's library slowed, and much of his work focused on his plans for a large-scale universal encyclopedia, to be called l'Ordre Universel de la Nature. Our Adanson Library contains an 18-page reprint of a plan for this project. He was still acquiring books at this time, e.g., Dictionnaire Raisonné Universel des Plantes, Arbres et Arbustes de la France, by Buc'hoz (Paris, 1770–1771, 4 vols., AD 22). Annotations by Adanson appeared in the main part of the dictionary, in the index of diseases, in the "Méthode de Linn." and in the end pages. Another late acquisition, Essai sur la Physiognomonie des Corps Vivants, Considérées depuis l'Homme jusqu' à la Plante by Jean-Joseph Sue (Paris, 1797, AD 122), was heavily annotated in the botanical sections. A work by Benjamin Thompson, Comte de Rumford, Mémoires sur la Chaleur (Paris, An XIII–1804, AD 117), was inscribed to Adanson by the author and heavily annotated by Adanson. Considering the ongoing annotations of books as he acquired them, it seems that Adanson's restless and capacious mind was constantly collecting and assimilating material to apply toward his encyclopedic knowledge and his efforts to apprehend the "big picture" of the natural world, to be presented in his universal encyclopedia.

Acquiring Adanson's library gave us the opportunity to safeguard and make available to researchers this large physical remnant of the life and work of an extraordinary man.

A finding aid for this collection is available online.

For more detailed descriptions of the items in the finding aid, see the Adanson Collection PDF, which is a second edition of the list of books and manuscripts that were catalogued in our publication, Adanson: The Bicentennial of Michel Adanson's "Familles des Plantes" (1963–1964).

After acquiring the Michel Adanson Library, the Hunt Botanical Library organized a symposium on 18–19 August 1963 to commemorate the bicentennial of Adanson's publication of Familles des Plantes (1763–1764) and organized an exhibition of Adansoniana to unveil to the public this gift from Roy and Rachel Hunt.

For information about portraits of and biographical citations for Adanson, see the Hunt Institute Archives Register of Botanical Biography and Iconography database.

Information about Adanson as a member of the Académie des Sciences is available at its Web site. 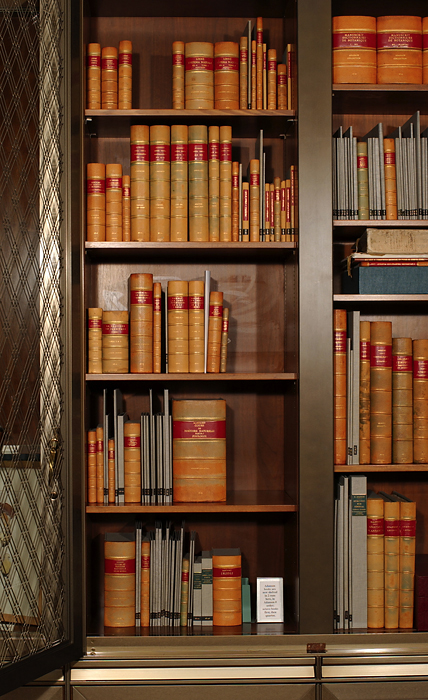 Michel Adanson Library in Hunt Institute's Reading Room, May 2006, photograph by Frank A. Reynolds, reproduced by permission of the photographer.