This is an annotated list of about 7,500 names of plants (mostly Latin binomials) that have been generated during the last 200 years as a result of the activities of an official Spanish expedition (devoted to natural history) that began its work in Mexico in 1787 and closed out its work in the New World in 1803. The relevant names, whether officially published or existing only as manuscript names, are those that usefully can be documented to some degree, in order that a researcher may hope to identify the plant to which a name applies. Identification of the plants may be possible if their original geographic source is known, if an associated carefully drawn description, detailed illustration or a preserved specimen is available or from a combination of the above.

Documentation may consist of a reference to a specific locality associated with the name, e.g., on a label with a herbarium specimen, or indirectly by a reference to one of the more than 400 numbered illustrations (icones) that were cited in the posthumous works of the Expedition's botanists, published 1887–1894. A very important contribution to documentation is the sum of the new names that have been based on the Expedition's materials during the two centuries that have elapsed since the collections were returned to Europe.

Scientifically the Royal Botanical Expedition to New Spain was of extraordinary potential importance. Before 1800 the scientists of the Expedition had explored more widely in tropical and subtropical North America than any previous European travelers of their ilk, and always with the primary aim of producing a great new illustrated Flora Mexicana. If a summary account of the Expedition had been published when the surviving scientists returned to Europe, in the form they envisaged, it would have been a major contribution to our knowledge of the plants of tropical America.

The botanical materials gathered by the Expedition in America over many years, including descriptions, observations, illustrations and herbarium specimens, went their several ways in the early years of the 19th century. The botanical community was scarcely aware of their existence and even then thought of them as disparate units, of some inherent scientific interest but without any perceived relationship to the work of a real Expedition or to one another. The illustrations became relatively well known because of the work of A. P. de Candolle and were commonly attributed to Mociño, who had brought them to the attention of de Candolle. Many duplicate specimens in Lambert's herbarium were studied and reported upon as from the herbarium of Sessé & Mociño, but at the same time many exactly equivalent specimens in other herbaria were being wrongly attributed to Pavón. The connection between the illustrations (which were in de Candolle's collection in Geneva) and the duplicate specimens distributed by Pavón (which by 1845 had become dispersed to a number of herbaria) was not well understood. The original herbarium of Sessé & Mociño, with its thousands of named specimens, remained unstudied in Madrid until after 1935. It was not generally realized until some years after the publication of Plantae Novae Hispaniae and Flora Mexicana that these works contained many hundreds, if not thousands of supposedly new names (in fact it was not until these new names were listed in the standard indexes to such names, 1929–1933). There has never been an effort to bring all this material together, collate the data from different sources and estimate the scientific value of the whole.

In the closing years of the 20th century almost every serious publication on the taxonomy of tropical American plants, or on the floristics of the same region, began to include notice of these Sessé & Mociño names and to cite them in publication, often erroneously or in doubt of the history of the name, or of the proper identity of the associated plant or its geographical origin. It is our hope that this Guide will serve to answer many such questions and enable botanists to think of the Royal Botanical Expedition as the great enterprise that it actually was, and one that is continuing to contribute mightily to our knowledge of tropical American plants.

With Rogers McVaugh's Botanical Results of the Sessé & Mociño Expedition (1787–1803) VII. A Guide to Relevant Scientific Names of Plants (2000) and The Torner Collection of Sessé & Mociño Biological Illustrations CD-ROM (1998) being out of print, in 2018 the Institute digitized the McVaugh book and turned the CD-ROM into a searchable database so that scholars can once again pair McVaugh's exhaustive accounting of the approximately 7,500 plant names relating to the Expedition with the full-color digital reproductions of watercolor botanical drawings from the Expedition for the most comprehensive information yet assembled about the botanical results of the Spanish Royal Botanical Expedition to New Spain. 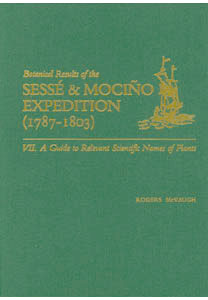