A great way to learn in-depth about different aspects of our collections is to schedule a tour or talk for your group. Our curators provide tours of the current exhibition and our departments and talks on a variety of topics relating to our collections. Please see the descriptions below for a sample of the tours and talks we offer. Often our curators can tailor talks to the interests of your group.

To schedule a tour of or talk at the Institute, please contact us (412-268-2434; huntinst@andrew.cmu.edu). When scheduling, please specify in which talk your group is interested. If your group has a specific interest (like collecting historical botanical prints), please let us know because we may be able to tailor a talk or a display to that subject. Please provide possible dates for scheduling your tour or talk and the estimated number of visitors. We will try to accommodate your wishes, but we do have a small staff. We request reservations at least one month in advance. Tours and talks usually begin with an introduction to the Institute. If your group is already familiar with us, we can skip the introduction. Our fee for a tour or talk is $100.

"Books about plants: A historical celebration"

In the world of the 15th–mid-19th centuries, there was no photography, no mass production printing, no TV or radio, no Internet. Communication took place through printed books, journals and papers; handwritten correspondence; original art; face-to-face discussion. Librarian Charlotte Tancin discusses the wonderful examples in our Library of the many creative ways that were used to communicate information about plants, botanical science, plant exploration, introductions of new plant species, gardens and gardening, and more. We have so many more outlets for communication today that it's interesting to see how much people who loved and studied plants did in the past without the benefit of today's technologies.

The history of botany is found not only in words but also in images. This talk and display focus on botanical art in the West that was created to be reproduced in books. Aside from a brief look at origins in classical Greece, Librarian Charlotte Tancin focuses on work done from the 15th through the 19th centuries in Europe before the invention of photography. Giving an overview of changing techniques and some of the ways in which botanical art has been used over more than 500 years, this talk looks at how artists took advantage of new techniques and how authors incorporated art into their published work. Once the printing press made it possible to make multiple copies of books and prints easily, art was often used to communicate in print, as it added a dimension that words could not provide, leading to a more complex presentation of information, advances in plant knowledge, increased book sales and an expanded readership.

Curator of Art Lugene Bruno gives an overview of our collection of instructional wall charts that were produced in Europe and circulated around the world from the late 19th to the early 20th centuries. Using the less expensive printing process of lithography, these large-scale charts featured the characteristics of important plant families (often in magnified detail) and were used in introductory to advanced botany courses. As information became accessible in different formats, this important record of educational presentation fell into disuse. In recent decades these charts have often been retrieved from neglected storage areas and dumpsters and donated to institutions for preservation.

The 18th-century Swedish naturalist Carolus Linnaeus (1707–1778) is world famous in the history of science, biology, zoology and most particularly botany. He's best known for two things: the system of binomial nomenclature for biological organisms that is still in use today and his classification scheme for plants, which fell out of use in less than a century. Librarian Charlotte Tancin discusses Linnaeus, how he developed his interests and what he did with them, and how he inspired others to see and study the natural world.

"From field to folio: Stories behind botanical publications"

Long before our modern conveniences, such as overnight shipments and photocopies, passionate botanists and botanical authors and artists were pouring blood, sweat and tears into their work. Ever at the mercy of the natural elements, each other and tight budgets, they traveled near and far to document the world's flora. Assistant Librarian Jeannette McDevitt displays some of our special items and speaks about the dramas, disasters and absurdities that went on behind the scenes before these books could come to fruition.

"Historical and contemporary uses of botanical art and illustration"

Since the 16th century, botanical artists have used direct observation to accurately document the identifying characteristics of plants. Curator of Art Lugene Bruno gives an overview of the various applications for this genre with a selection of originals from our Art Department, including scientific illustrations for floras and monographs, economic and horticultural serials, educational charts and texts and those solely for fine art exhibitions.

"The life and work of Pierre-Joseph Redouté"

Curator of Art Lugene Bruno discusses the influences, patronage and artwork of the famous 19th-century botanical artist Pierre-Joseph Redouté (1759–1840). This presentation includes a display of a selection of Redouté's original art and illustrated publications from our Art Department and Library.

Merian was an artist, a lifelong, dedicated amateur entomologist and a pioneer in the study of tropical insects. The manner in which she portrayed insects with their host plants was an innovation in scientific illustration. The images she published depicting insects, plants and a few animals of Surinam brought her international renown and changed the way her readers looked at insects as well as how they thought of the faraway part of the world from whence her depictions came. Her descriptions were based on careful, firsthand observation and yielded much new information for science. The renowned 18th-century naturalist Carolus Linnaeus (1707–1778) cited her more than a hundred times in his landmark works Species Plantarum and Systema Naturae. Librarian Charlotte Tancin discusses Merian, her life and her art.

Librarian Charlotte Tancin presents approximately 24 women artists, most of them British, such as Anne Pratt (1806–1893), August Withers (1792–1869) and Priscilla Bury (1799–1869). All of them did at least some work for publication, and the display includes originals, if we have them, and examples of their published work in a variety of kinds of books: flower symbolism and poetry books, manuals on drawing and coloring flowers, horticultural journals, books about wildflowers, books about toxic plants, private watercolor albums, botanical studies, floras and celebrations of exotic plants. The challenges faced by women artists in this period will be discussed.

Publication and Marketing Manager Scarlett Townsend talks about the history of the reading room, which was designed to capture the essence of Rachel Hunt's personal library, and conducts a walking tour of the antique furniture. The early herbals, the autograph letters and the Redouté paintings were important elements of her original collection, but equally important to her was the setting in which these items were enjoyed. She did not want her new library to look common or commercial. With the help of Harold LeBaron, her longtime interior decorator, and George H. M. Lawrence, our founding director, she chose items reflecting her tastes and personality.

"Specimens captured with pencil and paint: Examples of artwork from expeditions"

Our Library contains the published botanical art from many voyages and expeditions, created by artists who were part of an expedition, who were employed afterward to draw specimens for publication, or who explored on their own seeking new plants to draw. In many instances, drawings were made in lieu of taking actual specimens, drawn on site and later reworked for publication. In other cases, specimens were collected and then artists were employed to make drawings from them. Librarian Charlotte Tancin shows examples from the 16th to 20th centuries and talks about the creation of such art and the role it has played in the history of science, from Leonhart Rauwolf's exploration of the Turkish empire, to the United States' explorations and surveys for a railroad route from the Mississippi River to the Pacific Ocean in the 1850s, to the Amazonian art of Margaret Mee.

Librarian Charlotte Tancin discusses three explorers who were fortunate enough to travel to Japan after that country was closed to foreigners in the 1630s. The first of the three, Carl Peter Thunberg (1743–1828) was one of the 17 pupils of Swedish botanist Carolus Linnaeus (1707–1778). Known as the Linnaean Apostles, this select group traveled to faraway places to explore and bring back specimens, often giving them to or sharing them with their great teacher. Thunberg was in Japan from 1775 to 1776, publishing his Flora Japonica in 1784, but his Fauna Japonica was finished and published in 1833 posthumously by Philipp Franz von Siebold. The second, Engelbert Kaempfer (1651–1716), was in Japan from 1690 to 1692, and published his Amoenitatum Exoticarum in 1712, illustrated with engravings of his own drawings of Japanese plants. He also wrote a 2-volume History of Japan, published posthumously in English in 1727–1728. The third was Philipp Franz von Siebold (1796–1866), who visited Japan in 1823–1829 and 1859–1862, collecting a variety of natural history specimens. His 2-volume Flora Japonica was published in 1835–1870, and he introduced many Japanese plants into Europe. 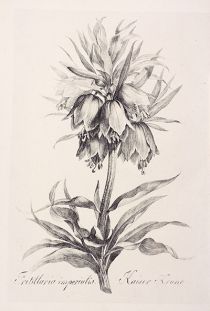