Held in conjunction with the official opening of the Linnaean Room housing the Strandell Collection of Linnaeana  at the Institute, this exhibition featured 72 works in watercolor, oil and egg tempera by Jeanne Holgate (also Mrs. D. K. Covington), who had been included in our 2nd and 3rd International Exhibitions. Holgate, a self-taught artist, was well known throughout the botanical world. Her career began as official artist for the Royal Horticultural Society Orchid Committee in London. She became a frequent award winner, and her reputation as a botanical painter, as well as a lecturer, soon spread. She came to the United States twice on lecture tours before moving, permanently, in 1966 to Towson, Maryland. Her work had been exhibited in such places as the British Museum; the Peale Museum, Baltimore; the National Arboretum, Washington; the Incurable Collector, New York; and the County Museum, Los Angeles. Her work has been reproduced in portfolios, as well as magazines and calendars, and at the time of this exhibition she was working on a series of state flowers. The items for this exhibition were from the Institute's collection or were on loan from the artist and private collectors, including Queen Elizabeth, the Queen Mother, and the Duke of Devonshire. A short catalogue accompanied the exhibition. The preview reception was held on 3 June. 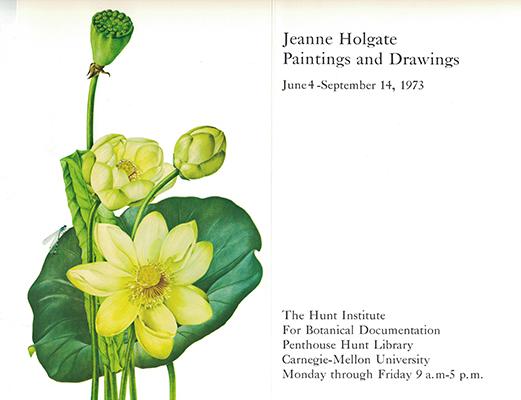