Flowers of the World: Paintings by Leslie Greenwood

This exhibition featured 141 works by Leslie Greenwood of England (1907–1987), who was noted for his botanical illustrations. Nearly all the watercolor paintings on display were originally prepared for Frances Perry's Flowers of the World, published in collaboration with England's Royal Horticultural Society. Working closely with the author to insure botanical accuracy, Greenwood prepared 828 illustrations for the massive project, painting from living specimens found in hothouses and gardens all over Britain and from other plants flown to him from around the world. Greenwood received two Gold medals from the Royal Horticultural Society, and his works were often displayed at the Society's Chelsea Flower Show. He was a fellow of the Royal Society of the Arts and of the Linnean Society. His work had been exhibited at the Royal Institute of Painters in Watercolour and at the Royal Society of British Artists. Greenwood gave a lecture, "The art of flower painting and drawing," at the exhibition opening. A catalogue accompanied the exhibition. 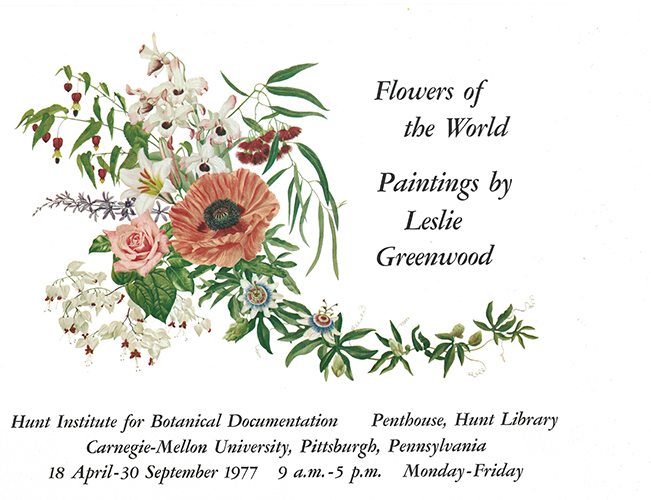 Promotional poster for Flowers of the World: Paintings by Leslie Greenwood (1977).