This exhibition featured Kandis Vermeer Phillips' illuminated letters, which are intertwined with plants, mammals and insects. Each letter was paired with a botanical artwork from the Institute's collection to create a literal or amusing relationship between the two, such as the connection of ants with an aardvark and a peony bud, the sunflower as a food source for a cardinal or the similar shapes of a fox's tail and foxtail grass. Along with the artworks, three 15th-century illuminated manuscript leaves from Special Collections, Carnegie Mellon University Libraries, were on exhibit with a display of the tools, pigments and other materials used in illumination.

Phillips initiated this alphabet after a friend recommended that she combine her miniature paintings of flowers, birds and insects into letterforms. She had extensively studied the history of medieval illuminated manuscripts and the use of natural pigments in that period. Decorative letterforms were used in religious texts to designate new sections and were painted in opaque colors of red or blue. Colored letters might include white patterns, backgrounds with natural images, fantastical creatures or gilding with metal leaf. The birth of her granddaughter Ashton in 2006 inspired the design of an abecedarium filled with meaningful representations of flowers and creatures found in her garden or during her family's travels. Phillips' final designs were transferred to the smooth surface of parchment (in this case sheepskin) to allow for fine detail in a small scale. Using a drybrush technique with a 000 brush, she built up color and value with individual delicate strokes and outlined the letters with shell gold. This alphabet was completed in 2010, and the artist continues to experiment with other letter images and processes, including metalpoint drawing.

The reception on Thursday, 13 September (5:00–7:00 p.m.) was open to the public. At 5:30 p.m. the curators and Phillips gave a short introduction to the exhibition in the gallery.

Phillips gave a demonstration on drawing letterforms in silverpoint in the gallery on Friday, 14 September (10:00 a.m.–noon and 2:00–4:00 p.m.). She had available sketches showing the metalpoint process along with various metals and prepared papers with which visitors could experiment. In addition, she discussed informally the history of illumination and metalpoint during the demonstration. 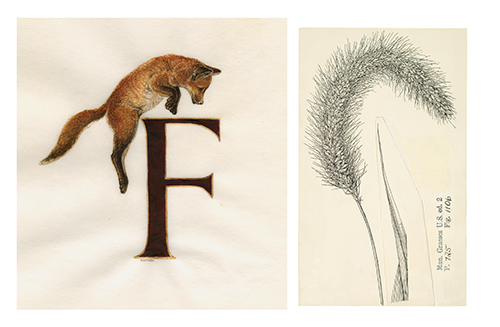