There is great expectation in the promise and energy held within a bud or a seed, and phases of this continuous cycle of plant development were beautifully illustrated with collection items. Artworks by 36 historical and contemporary artists illustrated their individual observations of intriguing moments of developing stages that may occur over a period of months or even years. Each plant's existence relies on the ability to time emergence during optimum conditions, to process nutrients and energy through photosynthesis and cellular respiration and to reproduce through interaction with other organisms and natural phenomena on the earth.

What are often considered the beginning and end of a plant's growing season are instead part of a continuous cycle of emergence, growth and dormancy. The seed of a flowering plant, having been dispersed by wind, water, animal or other means, lies dormant in the soil, protected by nutrient-rich tissue and an outer seed coat. Only after sufficient light, moisture and warmth are available will the embryo begin to develop a root and stem system along with one or two seed leaves (cotyledons). Growth continues through photosynthesis and cellular respiration. Buds form and petals open to expose pathways to pollen and nectar that encourage fertilization. After fertilization a seed develops and, when mature, is released near or far afield to lie dormant until conditions reoccur that permit the cycle to continue. In contrast, a bulb, rhizome or corm lies dormant underground. When conditions are ideal, a stem, leaves and ultimately flowers emerge while the roots absorb moisture and nutrients. Although fertilization of the flower ovary may occur so that seeds form, mature and disperse, this is not essential for survival. As the leaves and stem die back after flowering, below ground the bulblets, rhizomes and cormels are developing from the parent structures and storing nutrients for the following year's reemergence. This was an opportunity to study more closely details of these wonders of nature.

The opening reception on 17 March (5–7 p.m.) was open to the public. Beginning at 5:30 p.m. the curators gave an introduction to the exhibition.

Tour of the Carrie Furnace landscape

A tour of the landscape around the Carrie Furnaces in Rankin, PA, was held on Saturday, 21 May, 11:00 a.m.–12:30 p.m. "The Iron Garden: History and ecology of the Carrie Furnaces" focused on the diverse, successional plant communities of the site and how human history shapes our urban environments. It was led by Dr. Anna Johnson, ecological researcher at the University of Pittsburgh, in conjunction with Rivers of Steel National Heritage Area staff. The tour focused also on the making of the Iron Garden plaques, for which the Hunt Institute provided images. These cast iron plaques were placed throughout the site in 2015 as part of a collaboration among artists, Rivers of Steel National Heritage Area and the Penn State Master Gardeners to highlight the diverse plant life that has recolonized after the furnaces closed. A staff member from Rivers of Steel National Heritage Area also provided historical context of the site during the tour.

Our annual Open House on Sunday, 26 June (1:00–4:30 p.m.) included the talk "Forward into the past: The past, present and future of Carrie Furnaces" (1:30–2:30 p.m.) by Ronald A. Baraff, director of Historic Resources and Facilities, Rivers of Steel National Heritage Area, in which he discussed how the arts, nature, preservation and aesthetics interplay with the historic at the Carrie Furnaces. Following the talk were tours of the Great Expectations exhibition and the reading room (2:30–4:00 p.m.). This event was free and open to the public. 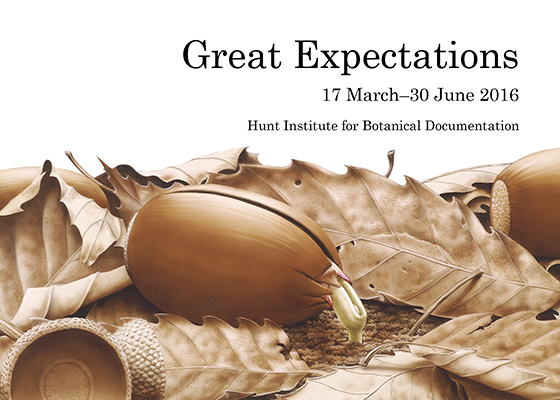