The Library has digitized John Ellis (?1710–1776), Directions for Bringing over Seeds and Plants, from the East Indies and Other Distant Countries, in a State of Vegetation: Together with a Catalogue of Such Foreign Plants as Are Worthy of Being Encouraged in Our American Colonies, for the Purposes of Medicine, Agriculture, and Commerce. To Which is Added, the Figure and Botanical Description of a New Sensitive Plant, Called Dionaea muscipula: or, Venus's Fly-trap (London, printed and sold by L. Davis, 1770).

John Ellis, a linen merchant and naturalist, studied coral and also imported seeds and plants. He corresponded with other naturalists and was a member of the royal societies of both London and Uppsala. In Directions, he discussed techniques for transporting plants and seeds from afar by ship so that they would more likely survive to be grown in a new location. He included a catalogue of exotic plants that might be successfully and usefully grown in the American colonies.

He also appended, with its own title page, a description of Venus flytrap that was sent "in a letter to Sir Charles Linnaeus." His letter to Linnaeus, dated 23 September 1769, was sent with an illustration and a specimen, and began: "My dear Friend, I know that every discovery in nature is a treat to you; but in this you will have a feast." A lovely hand-colored engraving of the plant serves as frontispiece to the published letter.

According to the Catalogue of Botanical Books in the Collection of Rachel McMasters Miller Hunt (Hunt Catalogue; 1958–1961), Ellis worked as an agent in west Florida and Dominica and had the opportunity to collect specimens such as Venus flytrap, which he named Dionaea muscipula. His letter to Linnaeus about this newly found species was also published in Uppsala and Erlangen. Another edition of Directions was published in 1771, with "The Method of Catching and Preserving Insects for Collections" replacing the paper on Venus flytrap.

The book is available as a PDF.

For information about portraits of and biographical citations for Ellis, see the Hunt Institute Archives Register of Botanical Biography and Iconography database. 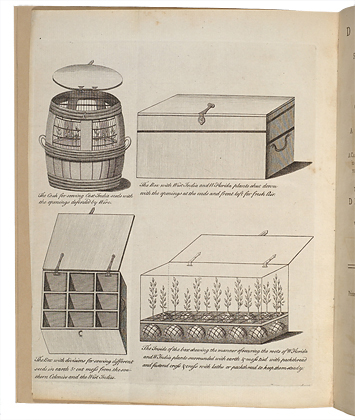 [Examples of containers for transporting plants and seeds], engraving by an unknown engraver after an original by an unknown artist for John Ellis, Directions for Bringing over Seeds and Plants (London, printed and sold by L. Davis, 1770, frontispiece), HI Library call no. MC1 E47D.