Selections from the Archives of the Hunt Institute

Walter Hodge and Barbara Taylor first visited Dominica in 1937 during their engagement. Walter went alone in 1938; they returned together in 1940 after they were wed. This work ultimately resulted in the Flora of Dominica (Cincinnati, Lloyd Library and Museum, 1954). "Bobbie" kept journals of their trips, the first showing more clearly the complications of their cultural encounters. In 1937 Bobbie inadvertantly set the village atwitter by walking home from an expedition in her bathing suit. Later she wrote, "Walt was photographing this cliff [garden] and did not notice that a man was working in his plot there. The man noticed that we were taking a picture and shrieked across to us in patois that we would have to pay him for his picture. Don't know whether he thought we were going to do the climbing to give him his money, or whether he would think it worthwhile to come down for it! At any rate, Isabella [the maid] shrieked back that we didn't take his picture, and thus placated him."

Upon the Hodges' return in 1940 the war was underway, and an acquaintance "said that they had counted the hours and minutes until we would come for over a year, and when the war was declared, they were so afraid that it would keep us away. Then when they heard that we were coming they were afraid for us on the ocean in these troublesome times!" As World War II waged on, military botanists marked edible plants for survival training, tested fungicides on clothing and optics, tested fungi and bacteria in humans with "jungle rot" and developed and tested herbicides for biological warfare. Civilian botanists researched plants for camouflage and treatments for preserving cut branches, developed defoliation sprays and explored alternate plant sources for latex, rubber, fibers and the antimalarial drug quinine. Walter Hodge's time braving the mountains of Peru in search of quinine, one of the alkaloids in Cinchona Linnaeus bark, is documented here.

Hodge's photos show a mastery of traditional realist landscape conventions such as panoramic views and repoussoir trees. However, Hodge's photographs, with their dramatic treatments of light and composition, also have a surreal or impressionist feel to them and provide a visual record for large tracts of land before they were settled or destroyed. 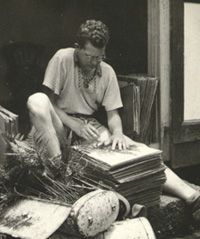