In addition to his many accomplishments, the famous Swedish naturalist Carolus Linnaeus served as praeses for numerous students when they defended academic dissertations during the period 1743–1776. The Index to Scientific Names is a reference resource on these dissertations and the scientific names that appear in them. The Index accounts for over 30,700 occurrences of more than 13,900 different formal names of plant and animal taxa that appear in the original editions of the 186 Linnaean dissertations and is intended to serve as a finding aid. To complement the Index, we have included a detailed list of these original dissertations, giving Lidén reference numbers, respondents' names, dissertation titles, dates of defense, pagination and various short titles by which they have been cited.

Following their original publication as individual items, the Linnaean dissertations were collected and reprinted in several editions, generally known as the Amoenitates Academicae. To make the Index more widely applicable, a concordance to some of these editions is also provided, enabling the researcher to locate citations in later editions whose continuous pagination does not match that of the original, individual dissertations. The publication also includes a historical overview and bibliography of the Amoenitates Academicae. Our hope is that researchers who want to consult the Linnaean dissertations will now have an easier time doing so and in the process may find themselves intrigued by this group of scientific writings. Information from this publication has been incorporated into the Index to Scientific Names of Organisms Cited in the Linnaean Dissertations database and the Original Linnaean Dissertations database. 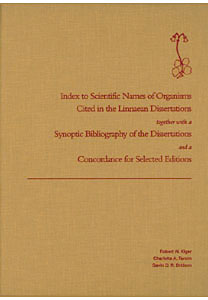