This illustrated exhibition catalogue features two centuries of American printed plant images from utilitarian to creative, the earliest from 1806 and the most recent, 2000. Some of the 19th-century artists include George Cochran Lambdin (1830–1896), William Sharp (ca.1802–after 1862), Isaac Sprague (1811–1895) and Frederick A. Walpole (1861–1904); 20th-century artists include Elfriede Abbe, Henry Evans (1918–1990), Warren Mack (1869–1952), Stanley Maltzman and Barry Moser. Biographies of the artists are included. Of special interest is a concise bibliography. Virtually all of the prints described and reproduced are from the Hunt Institute’s extensive collections. This is the first catalogue for which reproduction photography was done with a digital camera, the Nikon D1X, and for which all color scanning and correction were handled at the Institute. When paired with the now out-of-print Printmaking in the Service of Botany, together these catalogues explore the history of botanical printmaking in Europe and America and explain the various printmaking techniques.

American Botanical Prints of Two Centuries received the 2005 Ewell L. Newman Award. Sponsored by the American Historical Print Collectors Society, the Newman Award honors new titles that enhance understanding and appreciation for prints as part of the history and culture of North America. "This reasonably-priced reference belongs on the bookshelf of anyone who wants to know about botanical prints," says Michael McCue of Asheville, North Carolina, chair of the award jury. The Newman Award, which comes with a prize of $500, was awarded 14 May in Springfield, Massachusetts, at the society's 2005 annual conference. The award is funded by an endowment in memory of Ewell L. Newman, a founder of the American Historical Print Collectors Society, which fosters the collection, preservation and study of prints produced from the beginning of the 17th century through the 19th century. The society's Web site (www.ahpcs.org) includes an index of Imprint, its journal of the field, as well as a chronicle of the past distinguished winners of the Newman Award. 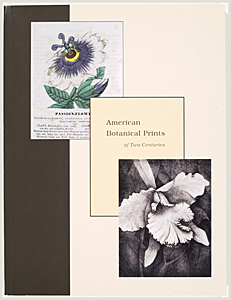