The Library has digitized Account of 814 Plants & Insects, Most of Which Are Reckoned Medicinal by the Chinese (ca.1800). This manuscript Chinese herbal dates from around 1800 and was purchased by Rachel Hunt in 1939. The text is written in Chinese and annotated in English in a different color of ink. The book has no title page or preface nor any additional text beyond what is in the individual entries. Typically there are four entries per page, and the reverse sides of all of the leaves are blank. The first text leaf also has these words written in English across the top of the page: "Account of 814 plants & insects, most of which are reckoned medicinal by the chinese; the representations generally show when the plant itself, or its root, flower, or fruit, is to be used; in reading their names, the vowels a, e, i, are most commonly to be pronounced after the french manner; the book is bound after the chinese manner, and begins where ours end." The only other text is that of the entries themselves and the accompanying notes in English, and there is no index.

Information from colleagues has led us to articles by Georges Métailié, who has done research on two volumes that look like ours and are held in Parisian libraries, one at the Bibliothèque Centrale du Muséum National d'Histoire Naturelle and the other at the Société Asiatique. Métailié suggests that these books were produced in China for a foreign audience. His research also shows that the illustrations in these books copy images in an earlier work by Chinese physician and pharmacologist Li Shizhen (1518–1593), the Bencao Gangmu, a core work on Chinese materia medica.

In checking the images in our manuscript herbal against the three illustrated volumes of a 1669 edition of the Bencao Gangmu, nearly every plant and animal shown in our manuscript herbal is also depicted there, and in nearly all instances they are copies, as Métailié had found in examining the Parisian volumes. In a small number of instances they show the same plant but have been redrawn in a different way. As we learn more about our manuscript Chinese herbal, additional information will be posted here.

The Chinese herbal is available in four PDFs. 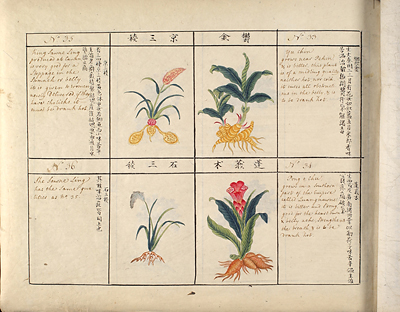