The Library has digitized Flore Pittoresque Dédiée Aux Dames, a very rare work by the French artist Antoine Chazal (1793–1854). The 50 color stipple engravings were executed and finished by hand by Chazal, 44 after his own originals, 4 after his teacher Gérard van Spaendonck (1746–1822), and 2 after Jan van Huysum (ca.1687–1740). Chazal was a talented flower painter, but he made his living in a variety of genres, including portraiture and zoological and anatomical illustration, as well as painting miniatures, enamels and designing for fabric manufacturers.

Chazal was born in Paris and lived there his whole life. He and his brother, André (1796–1860), both became engravers, but Antoine also was a painter. Unfortunately Antoine's work has been confused with his brother's as well as with that of another Antoine Chazal, Antoine Touissaint de Chazal (1770–1822), who was an amateur artist. André is mostly remembered for attempting to murder his wife, Flora Tristan, an early feminist and socialist writer. André and Flora's grandson was the famous artist Paul Gauguin (1848–1903).

The artist dictionaries say that Antoine Chazal studied with artists by the name of Misbach and J. Bidauld though it cannot be confirmed who these artists are, or if Chazal truly studied with them (Nusbaumer 2012, pp. 21–23). He was in fact a student of Gérard van Spaendonck, a master of the floral watercolor, who also taught the famous Pierre-Joseph Redouté (1759–1840). Spaendonck appears to have been more than just a teacher as he was a witness at Chazal's wedding in 1818. It was in that same year that Chazal, with some guidance from Spaendonck, started to produce his Flore Pittoresque. In 1822 he exhibited at the Salon for the first time with works from the Flore. Throughout his working career he continued exhibiting at the Salon mostly with flower paintings and portraits.

While he was pursuing flower painting, and maybe even before, he must also have been learning anatomical drawing. In 1817, a year before the Flore Pittoresque, four of his engravings appeared in Madame Marie Boivin's (1773–1841) Mémorial de l'Art des Accouchemens, a manual on the art of childbirth. He illustrated other obstetrical works, most notably Jacques-Pierre Maygrier's (1771–1835) Nouvelles Démonstrations d'Accouchemens (1822), which garnered the praise of the critics for its images. The accolades continued, and still do, for the unpleasantly realistic images of human diseases he did for the French pathologist Jean Cruveilhier (1791–1874) in his Anatomie Pathologique du Corps Humain (1829–1842). His longest-standing partnership was with physician Gilbert Breschet (1784–1845) for whom he illustrated until Breschet's death.

Zoological illustration was a natural step for Chazal from human anatomical work. Breschet recommended Chazal for the post of professeur d'iconographie des animaux at the Museum National d'Histoire Naturelle, a position that included teaching classes. Chazal was appointed to that post in 1831. Already he had made zoological illustrations for Freycinet's (1779–1841) Voyage Autour du Monde (1824–1844), the report on his voyage on the ship Uranie. After his appointment Chazal contributed to a number of zoological works, sometimes as artist and sometimes as the engraver or lithographer. Notably he was an artist for two editions of Buffon's (1707–1788) Oeuvres Complètes (1833–1834 and 1837–1838) and for Auguste-Nicolas Vaillant's (1793–1858) Voyage Autour du Monde (1840–1866).

Chazal also was an artist for Duperray's (1786–1865) Voyage Autour du Monde (1826–1830), but in this case Chazal's contributions were portraits of the native peoples and some landscape scenes. Portraiture was constant work for Chazal, and he exhibited multiple portraits at the Salon. For Frédéric Georges Cuvier's (1773–1838) Dictionnaire des Sciences Naturelles, Chazal copied engravings, paintings and sculptures of naturalists, including Carolus Linnaeus (1707–1778), though Ambroise Tardieu (1788–1841) engraved the portraits without crediting Chazal.

His published botanical work perhaps has gone largely uncredited. He contributed as artist to two editions of Philip Barker Webb's (1793–1854) Otia Hispanica (1839 and 1853) and his Histoire Naturelle des Iles Canaries (1835–1850), which feature traditional botanical illustrations. To Alcide Dessalines d'Orbigny's (1802–1857) Voyage dans l'Amérique Méridionale (1835–1849), Chazal contributed palm tree illustrations set in landscapes with native people. Many other artists and engravers worked on these publications, and Chazal's work makes up only a small percentage of the illustrations.

A collection of original Chazal botanical art can be found at the University of Transylvania in Kentucky. The collection was commissioned by Professor Robert Peter during a trip in 1839 to Paris to acquire scientific literature and apparatus for the medical school. The paintings feature medicinal plants and are original studies by Chazal of plants growing at the Jardin des Plantes.

The Flore Pittoresque shows in published form Chazal's skill as both a botanical artist and an engraver. It was released in parts between the years 1818 and probably 1825. According to a Sotheby's auction listing (2017) of this work, an 1823 advertisement states it was available in three different formats: a deluxe folio with plate captions printed in gold, a large paper "grand" quarto and a regular quarto. Hunt Institute's copy has a title page with gold lettering, but the captions for the plates are in black ink. The pages measure 36 centimeters tall, and each signature has two leaves. Despite not having plate captions in gold, the size and the gatherings suggest this is a folio edition.

The text gives instructions for painting in watercolor, and the first plate provides a color wheel and an artist's palette to aid the reader in selecting colors. A second edition with an additional 20 uncolored plates for artists to practice the techniques discussed in the text may have been planned, but either it was never realized or no copies have survived. Multiple sources continue to cite the work as having 70 plates. Often in these same sources the cover title, Flore Pittoresque, ou, Recueil de Fleurs et de Fruits Peints d'après Nature, Dédié Aux Dames, is given instead of that from the title page, which has caused additional confusion.

In 1953 Mourlot Freres (i.e., Mourlot Studios), known for its fine art lithographs, produced a facsimile edition of Flore Pittoresque with lithographic reproductions of only six plates, two of which were those after Spaendonck. It includes a facsimile of the original wrappers, but no title page. Hunt Institute holds a copy of the Mourlot facsimile.

Chazal was appointed a knight in the légion d'honneur in 1838, and as first flower painter in the cabinet of Queen Marie-Amelie in 1840, replacing Redouté. He died in Paris at the age of 61.

This book is available as a PDF.

For thumbnails of artwork by the artist, see the Catalogue of the Botanical Art Collection at the Hunt Institute database. 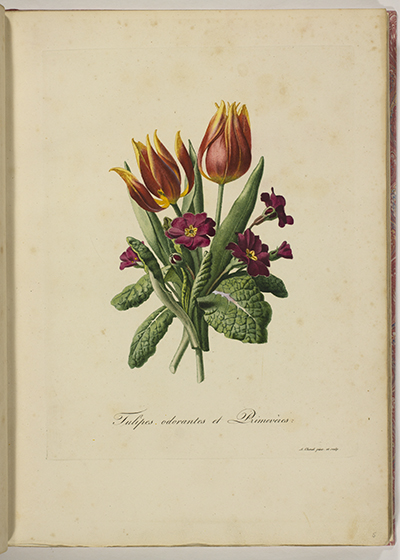