Our Library contains all of the volumes of The Botanical Magazine / Curtis's Botanical Magazine from 1(1), 1787 up to the latest series 25(4), 2008, with scattered holdings after that date. The loose wrappers that we received from Wheldon & Wesley are not a complete set, but they begin with volume 1, number 1 (published in 1787) and end with volume 12, number 146 (published in 1839). We have photographed all of the printed text on the 405 individual wrappers, along with 45 printed inserts. We also have 17 duplicate wrappers, only two of which were photographed because they contain some different information on the inner or back pages.

Today most researchers encounter Curtis's Botanical Magazine as a set of bound volumes containing plates and descriptive text highlighting 36 or more plants that could be grown in British gardens or greenhouses. This format belies the fact that subscribers initially received only a small fascicle of three engraved plates and descriptive text each month. The plates and text came tied together in a protective blue paper wrapper that served as a temporary front and back cover as well as a temporary title page for that fascicle. When subscribers received the final fascicle for a volume, it would arrive with a volume title page, and then the subscriber would hire someone to bind the fascicles into a volume. The temporary wrappers were usually discarded. The majority of these wrappers appear to have been just one sheet of folded paper. In addition to the wrapper's title page, the front and back inside "covers" and back "cover" of many wrappers also contained advertisements and announcements. Some wrappers were multiple sheets of folded paper, and some issues of the magazines included loose sheets of paper or pamphlets with additional information. Christie's auction house stated in one of its catalogues that these wrappers were made from sugar paper, of the kind used for making bags to contain sugar, related to a type of paper used by English confectionery bakers from the 17th century onwards.

Noting our interest in the history of botanical bibliography, over 20 years ago natural history booksellers Wheldon & Wesley offered us a large set of original wrappers from Curtis's Botanical Magazine. Such wrappers can be a boon to bibliographers and other historical researchers. As was noted in a short article by William Botting Hemsley (1843–1924) in The Gardeners' Chronicle,

It is probable that many of these old wrappers, as they are technically termed, still exist, but at the same time there is no doubt that they are comparatively rare, because most persons had their copies bound, and few persons realized the importance of preserving the wrappers on account of the advertisements, announcements, and even occasional corrections that appeared on them, and nowhere else in the work (1896, p. 389).

When the rising price of paper increased publishing costs, the price was raised to one shilling sixpence and a fourth plate per fascicle was added to compensate subscribers. After about no. 188 the number of plates per volume doubled, and the price increased again. Advertising would also have been an important way to recoup costs. William Curtis (1746–1799) had used the insides and backs of many of the wrappers to advertise his own garden, library and publications as well as selected forthcoming publications of botanists, horticulturists and practitioners of the branches of physic. His successor John Sims (1749–1831) opened and expanded that practice to include many kinds of ads and may have been something of a media pioneer in that regard. William Jackson Hooker (1785–1865) also continued this practice.

These wrappers contain more than just the bibliographic information on the front. Even some of the earliest ones include advertisements and announcements: about Curtis's "London Botanic Garden" and use of his lending library, other forthcoming publications (some with detailed descriptions), and changes in pricing and publishing schedules. Later wrappers contain more advertisements and announcements, including forthcoming publications from various publishers and booksellers as well as for products and events. Our wrappers also contain a number of advertisement inserts, including ads for new pen, pencil and lock designs by S. Morden & Co., a series of twelve botany lectures using transparent paintings and light by Robert Thornton (?1768–1837), a new work on chemistry by the controversial German chemist Frederick Accum (1769–1838), and a high-prize lottery.

For the period encompassed by our wrappers, editorship changed three times. William Curtis founded the magazine in 1787 and edited volumes 1–[part of ] 14, 1787–1799. As Ray Desmond (1987) reported, Curtis asked in his will that The Botanical Magazine be continued with his friend John Sims as editor and that his brother Thomas Curtis would continue to work on it. Thomas helped with the transition from William Curtis's death to Sims becoming editor in 1801.

Sims likely finished volume 14 in 1800 and served as editor for volumes 15–53, 1801–1826. He kept the same numbering scheme through volume 42 (1815) although he switched from Roman numerals to Arabic numbers. In 1816 he began a new series, restarting the issue numbering with no. 1 (his new series equating to volumes 43–53 in the original volume numbering). While William Curtis had left enough material for five years' worth of issues, in 1801 Sims announced that he would keep all of those plates set aside, to be used by the proprietors if needed, but that at present he was eager to showcase the very newest plants being introduced into England, especially South African plants from the Cape of Good Hope being grown in the London area. For volume 15, 1801, the second volume published after Curtis's death, Sims renamed the publication Curtis's Botanical Magazine, and he wrote a preface in which he recounted how the Magazine passed from William Curtis to himself as editor and how he would endeavor to maintain it in the manner in which it had been conducted in the past. Sydenham Teast Edwards (1768–1819) would still work as the principal artist, other artists were also being kept on, and John Bellenden Ker Gawler (ca.1764–1842) was hired to describe the new Cape plants. Sims wrote,

The same Artists are employed in every department of the Work as in Mr. CURTIS'S time. This will, it is hoped, insure the same excellence of execution, which is such that the figures in the Botanical Magazine, for elegance as well as correctness, will in general suffer nothing by a comparison with the most expensive botanical works (Bot. Mag. 15: Preface. 1801.)

However, a dispute between the Magazine and Edwards led to Edwards' leaving and founding his own publication, The Botanical Register, later Edwards' Botanical Register, which ran 1815–1847. Edwards edited and drew images for the Register until his death in 1819. It highlighted showy and popular garden plants and provided stiff competition to the Magazine as did several other similar publications.

The third editor, William Jackson Hooker, came on at a time of uncertainty for the Magazine. He served as chair of botany in Glasgow 1820–ca.1840, and so for some years he worked on the Magazine at a remove from its longstanding base of activity. In the early years of his editorship considerable tension developed between him and Samuel Curtis, with Hooker wanting to show more economic and useful plants and Curtis wanting more showy garden plants. Subscribers wanting the latter were cancelling and taking up subscriptions for the Register. Hooker drew the plates and wrote the plant descriptions for the November and December 1826 issues and then took over editing the Magazine from 1827 to 1864 with Samuel Curtis continuing to manage the publication. Hooker began another new series, beginning with no. 1 on 1 January 1827 (that new series encompassing volumes 54–70 in the original volume numbering). He was the sole artist for 1827 and "a number of the succeeding years" (Desmond 1987, p.65) until in 1834 he hired Walter Hood Fitch (1817–1892), a young botanical artist he had trained. Hooker was offered the position of director at Kew in 1841. His move to Kew simplified logistics around his editorial work for the Magazine, and Fitch moved to Kew at the same time. In 1847 Lovell Reeve took over publishing the Magazine after it became clear that the Register would cease publication. Thus in the late 1840s the editing and publication of the Magazine became more straightforward and more secure. Further editorial and bibliographic changes to the Magazine extend past the scope of our wrapper collection.

We also received one original fascicle in the state in which it was distributed at the time, still tied with its original piece of string, for issue "No. 6." Although the wrapper indicates that it was issued in John Sims' time, the three plates and accompanying text pages are from volume 1, 1787, before Sims got involved. Perhaps this fascicle was issued by Sims from back stock to fill a gap in a subscriber's collection.

A finding aid for this collection with PDFs of the individual wrappers is available online.

For thumbnails of artwork by the artists, see the Catalogue of the Botanical Art Collection at the Hunt Institute database.

For information about portraits of and biographical citations for the artists and the editors, see the Hunt Institute Archives Register of Botanical Biography and Iconography database. 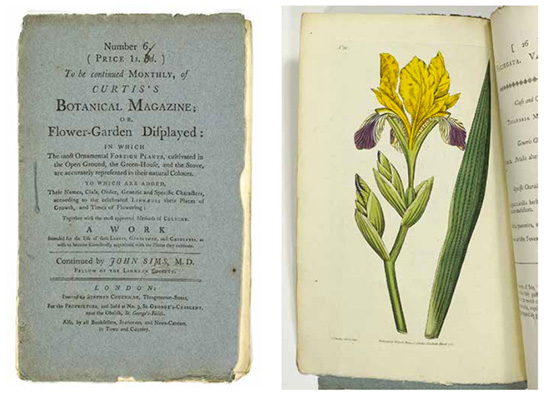