Although for the most part we no longer collect mycological books for our Library, we hold in the historical literature the first book devoted solely to mycology, Francis van Sterbeeck's Theatrum Fungorum published in 1675, which we have digitized. Our copy of Theatrum Fungorum is unique in that, for nearly every uncolored engraved plate, there was bound next to it a watercolor copy of the same plate (not printed). The plates in the third part depicting plants do not have corresponding watercolors, so it appears our artist was not interested in painting them.

In the early modern period, nature was envisioned as comprising three kingdoms or realms: animal, vegetable and mineral. There was disagreement about where fungi fit into that scheme, whether they were plants, animals or something else. As most of the people studying them were amateur or professional botanists, fungi were generally included in the vegetable kingdom. Some botanists reported their research in books strictly about fungi while others listed fungi among the other plants in their floras or systematic studies.

Sterbeeck's story begins with the Dutch botanist Carolus Clusius (1526–1609). Clusius traveled and botanized in Europe, exchanged plants and information with a vast network of friends and correspondents and helped to introduce many exotic plants to European gardens. He also studied fungi, collecting in the region of Hungary, Austria, Yugoslavia and the former Czechoslovakia (the old Roman region of Pannonia) in the late 16th century. When his mushroom studies were ready to be published, his publisher lost the 87 original paintings of fungi Clusius had provided, which are thought to have been made by his nephew, Esaye le Gillon (dates unknown). Clusius had 33 substitute woodcuts made, edited the text and published them together in Rariorum Plantarum Historia (1601). This was the first substantial published study of fungi, "Fungorum in Pannonis observatorum historia," in which he documented 105 species organized in numbered genera. Clusius' missing paintings eventually resurfaced and were published nearly 75 years after his death by Francis van Sterbeeck. They disappeared from view again until the 19th century and now are held by the library of Leiden University and referred to as the Clusius Codex.

Francis van Sterbeeck (1631–1693), a Flemish priest and botanist, spent most of his life in Antwerp. Following his ordination in 1655, he suffered a chronic illness and turned his attention to botany, becoming a recognized expert on fungi. In 1672 his friend Adriaan David, an Antwerp pharmacist and amateur botanist, brought to Sterbeeck Clusius's Pannonian fungus paintings, which had gone missing during Clusius's lifetime and were currently owned by Dr. Syen or Sijyen of Leiden University. Sterbeeck copied at least 70 of the images for Theatrum Fungorum (1675), sometimes noting that he took the images from Clusius' book of paintings. Sometimes he simply stated the images were "naer het leven," which can be translated from the Flemish as "from life" or "from direct observation" and arguably "true to life" (Money 2007; Lepp 2008). His book also contained images copied from published works by others, including Matthias de L'Obel (1538–1616), Johann Bauhin (1541–1613) and Robert Hooke (1635–1703). Sterbeeck's text, written in vernacular Flemish rather than the usual Latin, was his own, and with it he hoped to popularize interest in fungi among his countrymen, writing of culinary and medicinal uses and distinguishing between edible (section 1) and poisonous (section 2) mushrooms. A third section covered truffles and tuberous plants, edible and poisonous alike. The nature of tubers — were they fungi? — was still being debated.

Sterbeeck dedicated his book to Joannes van Buyten (1612–?1683), a physician and professor of anatomy in Antwerp, who reestablished Sterbeeck's health after his illness. Sterbeeck included a portrait of van Buyten engraved by Arnold van Westerhout (1651–1725) after an original painting by Karl (or Charles) Emmanuel Biset (1633–?1710). In turn Westerhout drew the original for the frontispiece, which features a scene from a mushroom market. It was engraved by Edouard van Ordonie (1638–1695). Some sources say that perhaps it is Sterbeeck's portrait above the market's archway.

The mushroom copper plates were engraved by Peeter van Sickeleers (also Sickeleer, Sikkeleer or Sikkelaer; fl.1674–1705). In 1674 he enlisted in the Guild of Saint Luke in Antwerp, thereby becoming a master artist and legally able to sell his work and take on apprentices. After engraving for Sterbeeck, Sickeleers and Westerhout went to Italy, first to Venice where they worked together engraving for a series of books published in 1679 by Giovanni Palazzi that featured allegorical portraits of emperors. They both continued on to Rome where Sickeleers became a member of the famed fraternity of artists, the Bentvuegels, who gave him the name Saturnus upon his initiation (Houbraken 1753). The Bentvuegels were a group of mostly Dutch and Flemish artists studying and working in Rome that came together to share knowledge and ideas related to the arts. They were not altogether a serious group and were known for their drunken Bacchic initiation rituals. Over the years Westerhout engraved for many publications published in Rome, but for Sickeleers the publishing record is quiet until 1705 when he and Westerhout engraved for a work by Giuseppe Martini published in Rome. Westerhout remained in Italy until his death, but after 1705 Sickeleers' whereabouts are unknown.

The first engraving in Theatrum Fungorum was signed "pet. Van Sickeleers. ad viuum delini. et sculpsit," which translates as "drawn and engraved by Pet. Van Sickeleers." The first accompanying watercolor in our copy was inscribed "peeter van sickeleers fecit ad viuum 1675," which translates as "made by Peeter van Sickeleers in 1675." According to the Catalogue of Botanical Books in the Collection of Rachel McMasters Miller Hunt, this was "apparently the original for pl. I" (Quinby and Stevenson 1958–1961, 1:364). Sickeleers primarily was an engraver and is noted only as such by Benezit (www.oxfordartonline.com/benezit) and Wurbach (1968) in their dictionaries of artists, but according to this engraving, he at least made the original mushroom drawings or paintings that he used to make the plates. There is also a portrait in the collections of the Fine Arts Museums of San Francisco that was engraved by Robert White (1645–1703) after an original by Sickeleers. However, it is difficult to say that these watercolors really are those originals. It is more likely that a previous owner traced or copied the plates and painted their copies before having them bound in the book. It was not unusual for owners to add color to illustrations in their books, and perhaps someone with above average artistic ability and a love of mushrooms wanted to improve his or her copy.

The watercolors that correspond with plates 19 and 28 have on the back preliminary drawings, or tracings, for plates 2 and 17, respectively. The pencil is very faint, and the artist sketched only the lines needed before color and shading would have been added with paint. These same kind of pencil lines can be seen on some of the finished watercolors.

The size and arrangement of the mushrooms on the watercolors when compared to the plates are practically exact, which is a good argument for the plates being traced. Seventeenth-century artists did have ways to transfer images from original drawings or paintings to the metal plates so that they did not have to recreate the image freehand. Additional steps could be added to ensure that the printed image was orientated the same way as the originals — the printed image is always a mirror image of the one seen on the plate. These techniques would mean that the original and the print could look identical in terms of size and layout, but these processes took extra time and money and sometimes ruined the original images.

The artist seems to have spent more time on some paintings than others. The finer ones are more detailed and show a range in tonality, the morels being a good example of the artist's ability to show depth and texture. When comparing these watercolors to the originals in the Clusius Codex (using the 1983 facsimile), the colors are very similar. The artist was either familiar with these mushrooms or the Codex. While Sterbeeck's text provides details on the colors of the mushrooms, it probably would not be enough to paint watercolors as fine as these.

Sometimes watermarks on paper can be helpful for dating works of art. Many watermarks can be traced back to a unique papermaker, and sometimes papermakers dated their watermarks. Unfortunately these watercolors are painted on paper with an undated foolscap watermark. The foolscap was a very common watermark used throughout Europe by many papermakers (in England the foolscap eventually became a way to indicate paper of a certain size, 8.5 × 13.5), and it would require more research to determine, if possible, the origin of this paper.

Perhaps the name inscribed on the front flyleaf holds a clue: Anna Catherina Josephina Wirix, dated 1760 ; or the name Peeters inscribed on the frontispiece. Nonetheless this unique copy of Sterbeeck's mycological milestone comes to life with these colorful paintings and reminds us of how many hands our books have passed through before they arrive here. Now as a digitized book these images can pass through countless hands without leaving a smudge.

The text, engraved plates and watercolor copies are available as PDFs.

For a discussion of books colored by previous owners, see the Colored and uncolored images in 16th–17th-century plant books page.

For information about portraits of and biographical citations for Sterbeeck, see the Hunt Institute Archives Register of Botanical Biography and Iconography database. 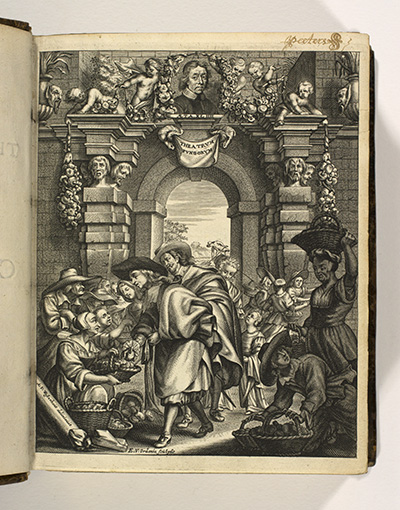