The book by Leonhart Fuchs (1501–1566) showcased here is one of three groundbreaking herbals written in Germany in the 16th century. Their authors were Protestant physicians working and writing during the Reformation, a German religious movement that was spreading throughout Europe. Following on the spirit of inquiry of the Renaissance, the Reformation encouraged further questioning of traditional knowledge. The authors of these German herbals used some of the received knowledge of earlier herbalists but added their own knowledge and observations as well as creating new, accurate illustrations drawn from life rather than copied from books. In text and images these landmark herbals broke with tradition, advanced knowledge and were models for later work by others.

The first of these three was created by Otto Brunfels (1488–1534), who in his Herbarum Vivae Eicones (Strasbourg, 1532–1539) presented beautiful new plant woodcuts drawn from nature by Hans Weiditz (ca.1495–ca.1536). Weiditz's drawings were true portraits of individual plants, faithful in every detail, including occasional bent stems and holes in leaves. The second of these three was written by Hieronymus Bock (1498–1554), whose New Kreütter Buch (Strasbourg, 1539, not in our collection) presented his observations of regional plants in vernacular German, classifying them as herbs, shrubs and trees. He published a revised and illustrated version in 1546 with images drawn from life by David Kandel (ca.1520–ca.1592). The third was Fuchs' De Historia Stirpium (Basel, 1542).

Religious intolerance in this period necessitated the relocation (and sometimes multiple relocations) of many people. Born in Bavaria, Fuchs eventually moved to Tübingen, a place that welcomed Protestants. There he practiced medicine and taught at the University of Tübingen. Fuchs was committed to reforming medical education and practice as he was critical of the erroneous information learned by medical physicians and apothecaries of his time. He said of his contemporaries, "one can find scarcely one in a hundred who has an accurate knowledge of even a few plants" (Meyer et al. 1999, 1:52).

Fuchs was inspired by the quality of Otto Brunfels' herbal and decided to create his own, improving on Brunfels' work. Fuchs took the opportunity provided by Renaissance publishers in which new editions of rediscovered ancient writings were being printed, and in comparing these new editions with earlier ones he found that much information had been lost in the more than a millennium between their original creation and their continued recopying and reinterpretation. Fuchs made extensive corrections in the course of preparing the text of his "Notable commentaries on the history of plants" to make his herbal more authoritative. He cited more than 40 ancient Greek and Roman authors as well as later ones in compiling his plant histories, adding an appendix of information from local sources and the first published glossary of botanical terms. His herbal went through 39 imprints in 5 languages during his lifetime.

The 343 chapters of text were enhanced by 511 large woodcuts, including pictures of more than 100 plants being illustrated for the first time in print. He hired three artist-craftsmen to make the illustrations: Albrecht Meyer (fl.ca.1542) made the drawings based on living plants, Heinrich Füllmaurer (fl.1542) transferred the drawings to blocks of wood, and Viet Rudolph Speckle (fl.1542) engraved the images in relief on the wood. The resulting images were large and clearly drawn, modeled on nature but edited to remove individual blemishes and show an ideal specimen. Shading lines in the engravings were kept to a minimum for clarity. In some cases several seasonal stages of the plant were shown in one image to facilitate identification. Fuchs strongly believed that the work of his three artists made his herbal an authoritative resource, and he paid them the unique honor of including their portraits at the back of the volume.

Fuchs worked for years on a revised and expanded edition, which by 1565 filled three large manuscript volumes and covered some 1,500 plants but which remained unpublished at the time of his death a year later. Later editions of the 1542 herbal were published with smaller woodcuts.

Our copy of De Historia Stirpium was chosen by the Potomac Unit of the Herb Society of America as the basis for a facsimile edition, with commentary, published by Stanford University Press in 1999 as The Great Herbal of Leonhart Fuchs. The project was initiated in 1967 and funds were contributed by members of the Herb Society of America and the Garden Club of America as well as by Hunt Institute and the National Endowment for the Humanities. While that facsimile was produced with illustrations in black and white, we are pleased to make our entire color copy available here now.

The book is accessible in the following PDFs.

For thumbnails of Albrecht Meyer images, see the Catalogue of the Botanical Art Collection at the Hunt Institute database. 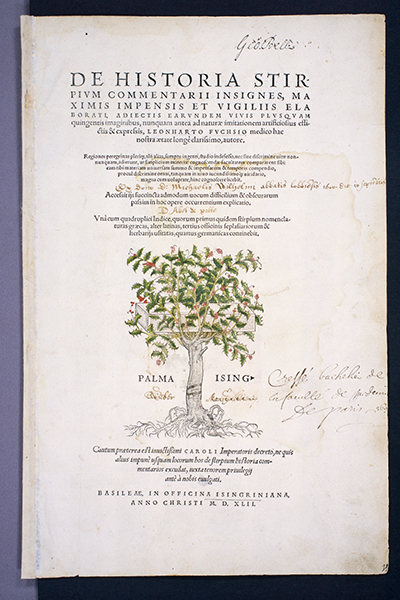