The 168 pieces of botanical art and illustration displayed represented the work of 39 artists, many of them primarily botanists and typical of those who had drawn plants at Kew and whose work was in the immense Kew collection. Some of the exhibit pieces, which covered a 200-year period, were purely scientific studies with dissections while others were more decorative. Most of the works were on loan from the Royal Botanic Gardens, Kew, long regarded as one of the world's leading botanical gardens. The remainder came from the Hunt Institute collection. One watercolor, by Georg D. Ehret (1708–1770), was of particular interest to the Pittsburgh area. Captioned "new species of iris discovered at Pittsburg," it dated from about 1760—only two years after British troops under General John Forbes built Fort Pitt. Also displayed were original works from Curtis's Botanical Magazine, which is still published by Kew. The magazine first appeared in 1787 and still ranks among the foremost botanical publications. John Brindle (1911–1991; curator of art, 1961–1982) and Gilbert S. Daniels (director, 1970–1977) traveled to London to select the artworks for loan. A catalogue accompanied the exhibition. 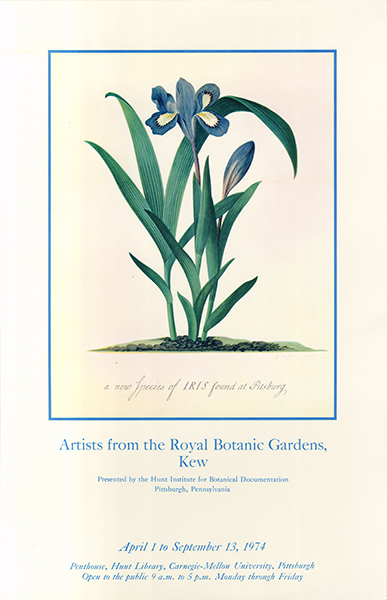 Promotional poster for Artists from the Royal Botanic Gardens, Kew (1974).