This exhibition featured more than 90 art prints on botanical subjects, the work of five West Coast Printmakers. The works were all original, limited-edition, hand-pulled prints (not photomechanical reproductions), representing a variety of media and techniques. Rather than focus on the work of botanical illustrators, the exhibit was a selection of works by artists who had chosen plants as their subjects—with treatment varying from realistic representations to subjective, imaginative plant studies. Four California artists, Henry Evans (1918–1990), Henry Mockel (1905–1981), Kenjilo Nanao and Marvin Spohn (1934–1976), along with Washington printmaker Walter Cleveland, were included in the exhibition. Cleveland's color etchings had a distinct flavor, and his handling of the intaglio process was reminiscent of a watercolor wash. Evans specialized in linoleum block prints. His approach to his subject matter was simple and direct and concentrated on the most basic characterization of each plant portrayed. Mockel's serigraphs represented a technical triumph for the silk screen process. Sometimes using as many as 38 different applications of transparent inks, the watercolor-like prints were faithful records of the desert plants of southern California. Since his arrival in the United States in 1960, Nanao had been connected with the revival of lithography in American printmaking. His fanciful interpretations of plant subjects were combined with a flawless stone-lithographic technique. Spohn's etchings were either colored by hand or printed with color inks. He specialized in studies of simple plant arrangements. A catalogue accompanied the exhibition. 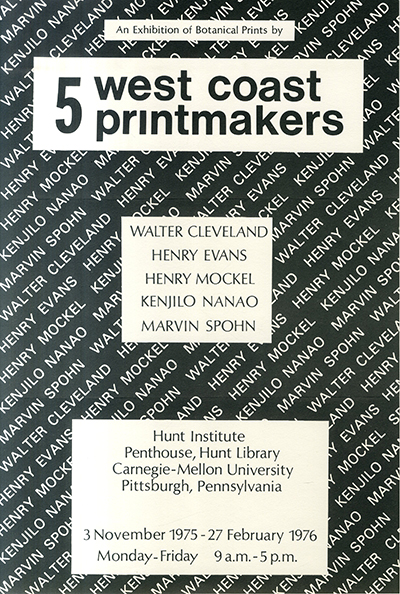