Flowers have always played an important role in Japanese culture. Indeed, botanical art classes now are offered in cultural centers throughout Japan. In recent years The Japan Association of Botanical Illustration has encouraged artists, produced exhibitions with catalogues and issued a journal. JABI has stimulated additional exhibitions and books, even bringing exhibitions to Japan from abroad. As a result, Japan easily ranks in the top half dozen countries to actively promote the genre of botanical art. Since mounting the exhibition Talking in Flowers: Japanese Botanical Art in 1982, the Hunt Institute has been interested in the subject. We were delighted to take this opportunity to display our growing collection of Japanese botanical art.

Weekly until the end of the exhibition, Dr. Norbert Pietrzak, former president of the Pittsburgh Bonsai Society, provided a bonsai from his personal collection. The first bonsai shown was a 21-year-old Ficus benjamina. Along with this traditional Japanese art form was a selection of suiseki he had collected. In the exhibition text Mr. Pietrzak explained that "The Japanese Islands are composed of various rock formations such as igneous, sedimentary and metamorphic, ranging from the Silurian and lower Paleozoic to the Recent Era. The Japanese have traditionally enjoyed the beauty of nature and so they searched for stones resembling steep mountains, rapids, waterfalls and seascapes. They called these stones suiseki, sometimes adorned with tiny clay or metal homes, bridges or boats. The Japanese place the stones in categories such as hut stones, figure stones, distant mountain or chrysanthemum stones. They are never altered—they are viewed as found. In Japan, suiseki are used for meditation thus taking us away from the stress of everyday life. An old Japanese man might carry a small stone in his pocket. He feels the stone for its shape and texture. This keeps him in constant contact with nature."

In conjunction with the exhibition at Hunt Institute, Phipps Conservatory and Botanical Gardens displayed Fuuryu: Japanese Botanical Watercolors from the School of Yoshiko Kamei in its new rotunda gallery from 1 March to 30 June 2006. The exhibition included 24 artworks by Ms. Yoshiko Kamei and her students based on the plants represented in their traditional family emblems, which are passed from generation to generation. In the emblem the plant image is reduced to its essence and used on kimonos and decorative items. 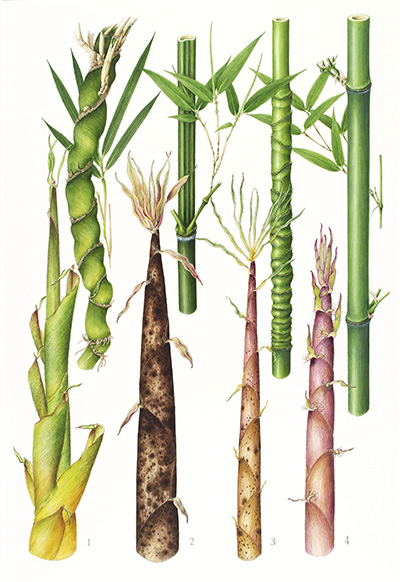