The exhibition included 45 watercolors of medicinal plants painted between 1935 and 1942 for the artist's planned book, "Drug Plants." Ida Pemberton (1890–1951) studied botany and art at Doane College in Nebraska and the University of Nebraska at Lincoln. She continued her art studies at the Art Institute of Chicago but did not graduate. In 1918 she married and later taught school for a short time in 1920. In 1924 the Pembertons moved to the Denver area. After the tragic death of her son, she found solace in the healing plants of her garden and began to paint. She completed 64 paintings and then designed a title page and endpapers. She visited publishers in Chicago and New York but was unable to find one for her book, "Drug Plants." However, the New York Botanical Garden was so impressed with her portfolio of drawings that they organized a one-person exhibition of Ida's work in 1950.

Following her death in 1951, Ida's paintings were sold to the University of Colorado Museum of Natural History in Boulder in 1955. The paintings were organized for a tour by the Smithsonian Institution Traveling Exhibition Service (SITES) and were displayed at numerous venues around the country from the 1950s to the 1970s. The artworks had not been seen for 21 years, and we were pleased to have them on loan from the University of Colorado Museum of Natural History for this exhibition. We were delighted that at last the images intended for the book "Drug Plants" were published in a full-color, illustrated catalogue accompanying the exhibition. 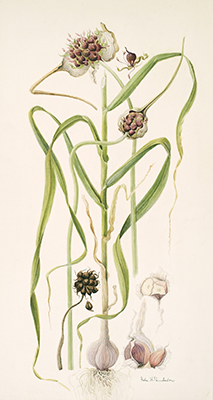