The Hunt Institute exhibited selections from its large collection of botanical watercolors by the early 19th–century British naturalist Edward Donovan. Created in the period 1823–1830, they depict exotic plants introduced to the British Isles. Along with these watercolors, we displayed a selection of Donovan's books lent by the Carnegie Museum of Natural History Library.

Edward Donovan (1768–1837), as were many cultured gentlemen of his day, was a collector of natural history specimens—from personal excursions in the British Isles as well as purchases from notable natural history auctions that included items from voyages of exploration. With the connections he made as a Fellow of the Linnean Society and the Wernerian Natural History Society, he also was able to access the best collections. Donovan referenced all of these sources for his books about the insects, shells, fishes and quadrupeds of England and the insects of China, India and New Holland between 1789 and 1827. He not only wrote and illustrated these books but also prepared the copper plates. It was not uncommon for private collectors to open small public museums of exotica, and in 1807 Donovan founded the London Museum and Institute of Natural History that included several hundred cases of birds, botanical specimens and other subjects. Donovan's voracious appetite for collecting, his unfortunate experiences with unscrupulous book publishers, and the economic decline in England after the Napoleonic Wars most likely forced the closure of the museum in 1817 and the auction of his collection the following year. He continued to publish, but his finances worsened, and in 1833 he published a plea for funds from his supporters to bring suit against the publishers. This was to no avail, and he died penuriously in 1837 leaving a large family destitute.

Exotic plants were featured in Donovan's early and short-lived series Botanical Review, or the Beauties of Flora (London, 1789–90) and occasionally accompanied the natural history subjects in his later publications. The botanical watercolors in our collection were created much later (1823–1830) and leave a trail of mysteries. We only know that the 709 watercolors that were tipped into 5 albums with spines stamped "Edward Donovan/Flower Paintings" were part of Rachel Hunt's original collection, but we have no date or source of acquisition. Many names appear on the artworks, some associated with plant collectors, botanical gardens or private collections. Geographic localities are noted indicating the origin and date of introduction from places such as Chile, Mauritius, Mexico, New Zealand, Nepal, Siberia and the eastern United States. Also included in this collection of watercolors is a small selection by anonymous artists (many with only a monogram, except for E. Duncombe). Even after Donovan's collections were auctioned, he would have had access to exotic plants grown in the greenhouses and gardens of private plant collectors and public botanical gardens. Perhaps he was preparing a new subscription series on exotic plants. Despite the many questions that persist about the history of this collection, these beautiful paintings are significant for their documentation of newly introduced plants in the early 19th century.

In conjunction with Edward Donovan: Naturalist Artist, Author and Collector, the Hunt Institute held its annual Open House on 22–23 June 2008. We offered talks about the context in which Donovan worked, a guided gallery tour of the exhibition by our assistant curator of art, tours of our departments and reading room, and opportunities to meet one-on-one with our staff to ask questions and see items in the collections. 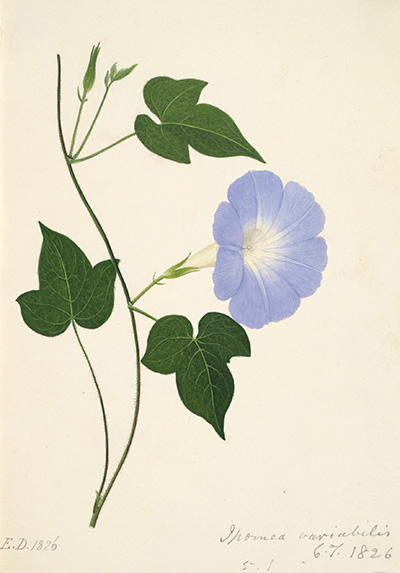