Wings of Paradise: Watercolors of Silkmoths by John Cody

The Hunt Institute exhibited 47 watercolors of silkmoths by John Cody. Cody is passionate about portraying the magnificent beauty of silkmoths and their associated plants with both artistry and accuracy. With these widely appealing watercolors, he hopes to increase awareness of their dwindling numbers and the need to conserve their natural habitats. Although the majority of silkmoths, which are members of the family Saturniidae, are found in the tropics, some species are found in North America and Europe. There are many possibilities as to why these big moths are endangered—from the loss of their tropical habitats through deforestation, to the damaging effects of man-made light, to pollution and to pesticides.

Since the age of five, when John Cody saw his first live specimen in his childhood neighborhood of Brooklyn, New York, he found silkmoths appealing simply for their magnificent form, color and texture. He was encouraged by family, friends and teachers to pursue his interests in understanding these short-lived creatures and was inspired by the flower and the bird paintings of the early 19th-century botanical artists Pierre-Joseph Redouté (1759–1840) and John James Audubon (1751–1851), respectively. During a class in entomology in college, Cody began this series of silkmoth paintings. After college he exhibited at the American Museum of Natural History and many university libraries. He trained as a medical illustrator at Johns Hopkins University, which honed his artistic and observational skills. A few years later he enrolled in medical school and pursued the field of psychiatry. His life in Kansas was filled with work, family and the biographies he authored, with occasional periods for painting. Over the years he and his family traveled to New Guinea, Peru, Madagascar, Ecuador, Borneo and China where he studied these moths in their native habitats and developed a concern for their conservation. It was not until he retired that he was able to devote all of his time to his avocation of painting the saturniid moths. Since then, John Cody's work has appeared in periodicals and art and natural history museum exhibitions throughout the United States, including the National Museum of Natural History in Washington, D.C. He was presented the Kansas Governor's Arts Award for Lifetime Achievement in the Individual Artist Category in 1997.

In Wings of Paradise: The Great Saturniid Moths by John Cody (1996), the artist addressed the often-asked question, "what are moths good for." Just as flowers are beautiful and short-lived, the main purpose of these moths is to perpetuate the species. Once they emerge from their chambers, from which they have stored enough energy to survive no more than a week on earth, these moths do not eat or drink. The male uses all of its energy to find a mate. Once the female's eggs are fertilized, she attaches them to a suitable food plant that will provide the necessary nutrition to sustain the life-cycle from caterpillar–to pupa–to moth. He is "surprised that these short, passionate lives do not strike people as romantic."

In the summer of 2008 at the age of 83, John Cody taught a workshop introducing moths into botanical illustration to a class at Phipps Conservatory and Botanical Gardens. Considering the interest in his paintings, Phipps exhibited giclée prints of Cody's paintings in its Welcome Center on Schenley Drive from 21 March to 30 June 2009.

We thank the donors to our Adopt-a-Moth Program whose contributions covered the shipping fee of Cody's 47 paintings from his home in Kansas to Pittsburgh. Each donor received the name of the moth they adopted and were invited to a special meeting with the artist.

In conjunction with Wings of Paradise: Watercolors of Silkmoths by John Cody, the Hunt Institute held its annual Open House on 14 and 15 June 2009. We offered two talks and displays, one on the life and work of Maria Sibylla Merian (1647–1717), whose work included beautifully illustrated folios on the insects of Surinam, and another highlighting women botanical illustrators over four centuries. We also had a guided gallery tour of the exhibition by our assistant curator of art, tours of our departments and reading room, and opportunities to meet one-on-one with our staff to ask questions and see items in the collections. 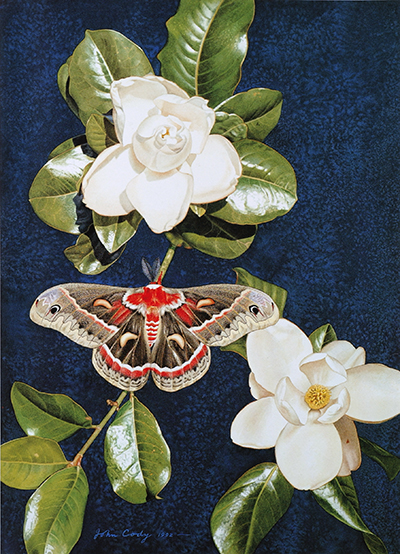