This exhibition showcased 48 American botanical artists who are revitalizing the centuries-old tradition of the florilegium by creating a lasting archive of watercolors and drawings of the plants growing at the Brooklyn Botanic Garden (BBG). This selection of original artwork, on loan from the BBG's permanent collection, was displayed with a sampling of historical printed volumes representative of the florilegium tradition from the Hunt Institute's Library collection.

By the 17th century, the introduction of rare and exotic plants through voyages of exploration created an interest in cultivating these new plants for the garden. This was accompanied by the development of many new varieties of common garden plants. Botanical gardens, initially developed in the 16th century to supply plants for medicinal use and to educate physicians, apothecaries and botanists, expanded their collections to include these plant introductions for scientific and horticultural study. Royalty and the landed gentry also desired these new plants for inclusion in their extensive estate gardens. Often, artists were commissioned to paint or draw a visual record, or florilegium, of a plant collection from an expedition or a specific garden. Some of these artworks were part of an owner's cabinet of curiosities, incorporated into the collections of natural history museums and herbaria or published as hand-colored engravings. The garden flower-book, often arranged by the flowering season and with little accompanying text, became a popular genre in literature that continued through the early 19th century.

In the late 20th century, there was a resurgence of interest in the florilegium tradition by botanical artists, botanical and horticultural librarians and horticulturists at botanical and country estate gardens in England, the United States and Australia. As the numbers of some plant species dwindle around the world, it becomes imperative to create a scientific and historical record of the plants of our time. These paintings are used for scientific study and for exhibitions that introduce the public to the importance of botanical art, gardens and herbaria. The Brooklyn Botanic Garden (BBG) Florilegium, established in 2000, was modeled after the florilegium formed five years earlier at Chelsea Physic Garden, London. Talented botanical artists are invited to join the Brooklyn Botanic Garden Florilegium Society and produce a determined number of paintings of plants from the garden for the archive. The society artists are revitalizing the popular 17th–19th-century tradition of illustrating the plants available at a specific time and growing in a specific place. Many of today's notable American botanical artists are creating a record of the BBG collections, including native, tropical and horticultural plants that are grown in the themed gardens and conservatory. The curators assist the society's collectors with cuttings, and the collectors then arrange for the shipment of the plant and communication of important plant information. In addition, a dried specimen of the same plant is collected and catalogued as part of the BBG's 250,000+ herbarium collection. Selections from the Brooklyn Botanic Garden Florilegium collection have been exhibited biennially at the garden and also at the Shirley Sherwood Gallery, Royal Botanic Gardens, Kew and the Botanic Garden and Botanical Museum Berlin-Dahlem.

During Cèilidh Weekend (Carnegie Mellon University's homecoming) on 6 and 7 October from 1 to 4 p.m., Hunt Institute offered demonstrations of watercolor techniques used in botanical art by four regional artists dedicated to painting from nature and sharing their knowledge through teaching. Each of these artists has offered classes in the Phipps Conservatory and Botanical Gardens' Botanical Art & Illustration Program and many were also members of the Allegheny Highlands Botanical Art Society (AHBAS), a local chapter of the American Society of Botanical Artists. On Saturday, 6 October, Sue Wyble and Donna Edmonds demonstrated a method of layering a limited palette of transparent watercolors to achieve a variety of colors. On Sunday, 7 October, Carol Saunders and Christine Hutson demonstrated various wet and dry brush techniques, including limning, used to achieve fluid color and intricate form. The demonstrations took place in the gallery, and one of the curators also was present to answer questions and talk about the current exhibition.

Founded in 1910, Brooklyn Botanic Garden (BBG) is an independent nonprofit institution committed to education, research, and the display of horticulture. BBG serves communities in New York City and internationally through its world-class gardens, extensive living collections, and pioneering educational and community programs. Situated on 52 acres in the heart of Brooklyn, the Garden is home to more than 12,000 types of plants and hosts more than 725,000 visitors annually. To learn more, visit bbg.org. 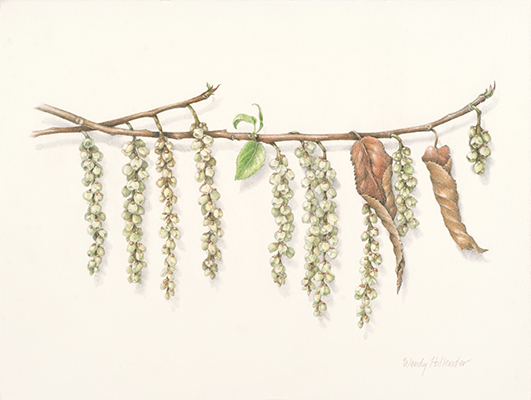