This exhibition included watercolors by the European physician and naturalist Charles Dorat (?1806–ca.1870) of medicinal plants that he found in the vicinity of the municipality of Cedros, Honduras. Strands of information from disparate sources were uncovered to create a biographical sketch of this little-known artist whose work is represented in the Hunt Institute collection. This exhibition featured the 42 Dorat watercolors in the collection along with Institute archival materials relating to other parties in his circle, such as the American shipping agent, steamer captain and naturalist John Melmoth Dow (1827–1892), the American physician and professor of materia medica Joseph Carson (1808–1876) and the English botanist and pharmacologist Daniel Hanbury (1825–1875).

Dr. Dorat lived in El Salvador and traveled in Honduras between 1850 and around 1870—states that had gained independence in 1838 but continued to experience revolution. Dorat's situation and interests have been partially fleshed out through publications and correspondence to and from naturalists, botanists and pharmacologists in England and the United States. He spoke several languages and was acquainted with Central American medical professionals, government officials and clergy and with European and American individuals and companies interested in materia medica and shipping raw materials and consumer goods from the region. Since Dorat was quite knowledgeable about mining operations and economic plants, these companies likely employed him. As was common in the 19th century, Dorat found time to pursue his other passions as a naturalist and an artist. Through his travels in these two states he became interested and knowledgeable about the culture of the indigenous people, the flora and its medicinal uses and the fauna, geography and history of the region. He also avidly photographed natural occurrences, such as volcanic eruptions, and urban and rural architecture. By 1860 Dorat had created 150 botanical watercolors of useful plants, and it was his desire to eventually publish in a series a flora of all of the states of Central America. A medicinal flora was never realized, and to date any traces of his being alive after 1870 have not surfaced. While not scientific illustrations, the watercolors by Charles Dorat are assured and informative and include details of flowers, seeds and roots and handwritten notes on their medicinal uses and their local names. 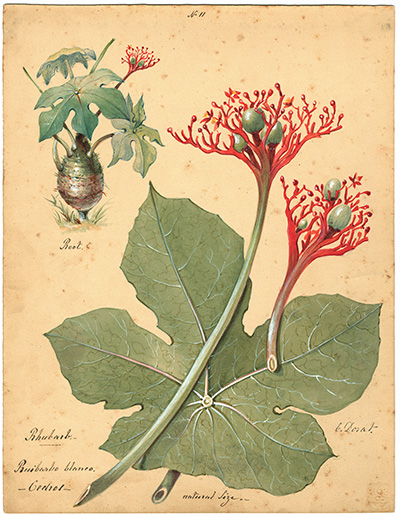