The Mysterious Nature of Fungi

This exhibit gave an overview of these mysterious organisms that are found almost everywhere on this planet and are the cause of both bliss and blight. Selections from the Hunt Institute Art and Library collections illustrated subjects such as misconceptions; characteristics that create delirium, disease or death; wild and cultivated edibles; intriguing structures that quickly morph, disintegrate or use propulsion to release spores; and beneficial and parasitic relationships with other living organisms. Whatever your interest, we hope that you came away with a new fascination and respect for fungi.

From the human perspective, fungi and their reproductive spores exist in the air we breathe, on the surfaces we touch, in the soil upon which we stand and within the oceans we traverse. Fungi play an essential role by decomposing organic debris and exchanging nutrients with plants, thus allowing all living organisms to thrive. Fungi can cause or cure disease, and the fruiting bodies can bring sustenance or death. Recognized as the 5th kingdom of organisms in 1969, they are among the most diverse and least understood, and surely many remain to be discovered and described. There are seven phyla of fungi—including one for undetermined fungi—and three of these are illustrated in this exhibition, the ascomycetes, basidiomycetes and zygomycetes.

The opening reception on 17 September (5–7 p.m.) was open to the public. At 5:30 p.m. the curators gave a short introduction to the exhibition in the gallery.

We also opened on Saturday and Sunday, 10–11 October, 1–4 p.m, during Carnegie Mellon University's Cèilidh Weekend festivities. On Saturday our curator gave tours throughout the afternoon of the exhibition. On Sunday (1:30–2:30 p.m.) Richard Jacob, a biochemist by trade and president of the Western Pennsylvania Mushroom Club, presented the talk "Mushroom clubs: Citizen science in action!"

The Cabinet of curiosities in the Hunt Institute lobby displayed lithographs from a limited-edition portfolio in our Library collection. The 20th-century American avant-garde composer, writer and visual artist John Cage (1912–1992) also was an avid, amateur mushroom forager who became so enthusiastic about the subject that he and his friend, visual artist Lois Long (1918–2005), co-founded the New York Mycological Society in 1962. Together they published The Mushroom Book (1972), with the taxonomic assistance of the mycologist Alexander H. Smith (1904–1986). 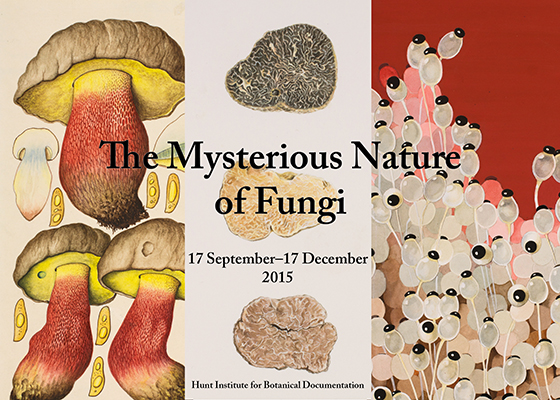