Index to Scientific Names of Organisms Cited in the Linnaean Dissertations

Compiled by Robert W. Kiger, this Index accounts for over 30,700 occurrences of more than 13,900 different formal names of plant and animal taxa that appear in the original editions of the 186 dissertations defended by students of Carolus Linnaeus (Carl von Linné, 1707–1778), during the period 1743–1776. It is intended to serve as a finding aid, not a nomenclator, and for the sake of organizational simplicity the entries are not always exact transcriptions of the names as they appear in the dissertations (see below under Rendition). Especially for nomenclatural matters, which may hinge on precise details of format and context, the dissertations themselves should be consulted.

The dissertations were reprinted a number of times in collected editions, two of them edited by Linnaeus himself (Amoenitates academicae). Besides being entirely reset, and paged differently, these reprinted versions often differ from the originals in actual content. Since this Index was compiled from copies of the original editions (specifically, the two complete sets in the Strandell Collection at the Hunt Institute), it does not reflect any of the additions, corrections and deletions that Linnaeus made in the Amoenitates versions, and of course the page numbers cited here are not those of the Amoenitates or other collected editions. Still, the Index should prove generally useful for finding corresponding citations in the later editions.

The Index cites each occurrence of each formal (thus "scientific") Latin (or Latinized) designation of a plant or animal taxon at the generic level or below—whether uninomial, binomial or polynomial, whether in a taxonomic citation, prose or a note, and whether newly described, accepted, synonymized or noted in passing. Exceptions are: occurrences of such names in dedications, invocations or epigrams that are not part of the dissertation content proper; occurrences when the taxa are mentioned comparatively for only descriptive (not differential) purposes (e.g., to indicate size or habit); and occurrences as part of a title.

Common names, including Latin renderings, are not included, except when they are identical to formal ("scientific") names and the two usages could not be discriminated (usually in prose contexts and involving uninomials). Also not covered are purely pharmaceutical (pharmacopoeic) denotations, when the name is used to designate a pharmaceutical entity, not a plant or animal qua taxon (even if the name is identical to the corresponding taxonomic one).

The records in the database include fields for: Name, Dissertation, Lidén, Page, and Note. The dissertation titles are abbreviated. The Lidén numbers are the dissertation sequence numbers.

The names are transcribed literally from the dissertations, as to typography, orthography and word separation, except that:

ABBREVIATED WORDS are silently expanded to their full forms, when those are clearly discernable.

ALCHEMICAL AND ASTROLOGICAL SYMBOLS representing words or parts of words are silently translated to the equivalent Latin orthographies.

ALTERNATIVE NAMES contained within a single citation (i.e., when generic names or sets of epithets are separated by "sive" or "vel" or "seu," or when a trivial epithet is marked off parenthetically or typographically within a polynomial) are indexed separately, each silently expanded to full form—e.g., "Mus seu Cuniculus indicus" is indexed as both "Mus indicus" and "Cuniculus indicus," and "Ispida (viridis) supra ferruginiaea" as both "Ispida viridis" and "Ispida supra ferruginiaea";

AMPERSANDS are transcribed as "et";

AUTOCHTHONOUS (LINNAEAN) TYPOGRAPHIC ERRORS AND ORTHOGRAPHIC LAPSES OR VARIANTS are changed to conform with present general taxonomic usage, and the erroneous or variant dissertation usages are noted within brackets;

CAPITAL LETTERS (initial or internal) in any words that follow the generic name are silently changed to lower case—this includes words that are themselves generic names in other contexts;

GREEK-LETTER VARIETAL DESIGNATIONS that follow binomials or polynomials are transcribed as "alpha, "beta" etc.—those that precede names cited in synonymy are silently deleted;

HYPHENS are silently deleted or inserted to accord with prevailing contemporary usage, or with modern nomenclatural usage when pertinent, in order to achieve consistency in the rendition of names that are otherwise the same;

INFLECTED FORMS are silently transposed to the nominative case;

LOWER-CASE INITIALS in words used as generic names are silently changed to capitals;

VARIANT TYPOGRAPHY is silently changed to conform with present general taxonomic usage; e.g., 'i' versus 'j' and 'y', 'u' versus 'v'.

I have made no systematic attempt to uncover the apparently numerous inaccuracies in Linnaeus' renderings of names that he was citing from other sources. In the time available it would have been impossible to track down the original source of every such name (often Linnaeus did not indicate the source), discover the disparities (changes in word order, elisions of words, differing orthographies and Latin constructions), and reconcile them. However, when I have happened to notice such variant renditions, the differences are noted in square brackets.

Authorities and sources that are cited in the dissertations along with the names proper are not transcribed, except when they are integral parts of the names.

Question marks associated with (indicating taxonomic uncertainty about) generic names or epithets are not transcribed.

Pan Svecicus (Lidén no. 26) presents peculiar difficulties. The list of species therein follows the scheme of Linnaeus' Flora Svecica (Stockholm, 1745), and the Flora numbers are cited first, followed by names that mostly are just ad-hoc short-hand references to the full names that appear in the Flora. Linnaeus indicated that he had done this deliberately, as a matter of convenience, and so the shortened names themselves cannot be regarded as "formal" usages. However, it seemed less than satisfactory to include in the Index only the generic names involved, and on the other hand it seemed equally unsatisfactory to translate to the full names from the Flora. So I have cited these shortened versions as they appeared, even though they are informal in nature, and even when they are literally ungrammatical.

No thorough bibliographic comparison and analysis of multiple copies of the individual Linnaean dissertations has been reported, and it is not certain that textual variations do not occur within the original editions. If users of the Index encounter any such variations that conflict with the entries herein, it will be helpful and much appreciated if they will bring them to our attention. 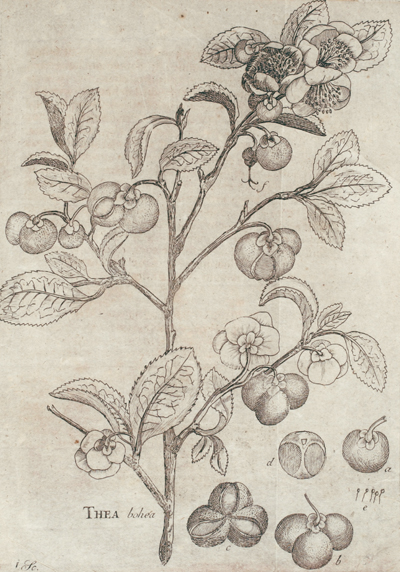 Thea bohea [Camellia sinensis (Linnaeus) Kuntze, Theaceae], engraving by an unknown engraver after an original by an unknown artist for Pehr Cornelius Tillaeus (1747–1827), Potus Thaeae (Uppsala, 1765), Linnaean Dissertations, Lidén no. 142, Strandell Collection of Linnaeana, HI Library. The first living plants of tea were brought to Sweden in 1763 with help from Linnaeus. This dissertation discussed the plant, its preparation and uses, the qualities of tea and its medicinal use.