The Art Department has an album of 471 watercolors depicting plants by the Berlin apothecary and artist Andreas Friedrich Happe (1733–1802) that was assembled about the year 1780. On the fly-leaf is the autograph signature of a former owner, Anna Kessler, in the 19th century. Each plant has been labeled, probably by Happe, in polynomials, largely from Tournefort, and often later in Linnaean polynomials and binomials. The subjects include over thirty cryptogams, mostly ferns and fungi, and there are about six each of Gentiana Linnaeus, Geranium Linnaeus, Papaver Linnaeus, Saxifraga Linnaeus, Veronica Linnaeus, Prunus Linnaeus, Ranunculus Linnaeus, Rumex Linnaeus and Solanum Linnaeus.

Compiler Allan Stevenson in the Catalogue of Botanical Books in the Collection of Rachel McMasters Miller Hunt (Pittsburgh, 1961, vol. 2, pt. 2, entry 659, p. 421) described the watercolors: "The drawings are made with considerable care for botanical detail, and with a delicate eye for color and line. If some designs are a little stiff, if the artist proves to be no Ehret or Redouté, he nevertheless communicates an appreciation of a very large variety of nature's forms, and at the same time simple statements now of value to the historical taxonomist."

A handwritten statement dated 2 August 1928 on the printed stationery of Auskunftsbureau der Deutschen Bibliotheken (Information Bureau of the Germany Library) probably was acquired by Rachel Hunt at the time of the acquisition. It referred to four titles, Botanica Pharmaceutica (1785–1806), Flora Cryptogamica (1783), Flora Depicta aut Plantarum Selectarum Icones ad Naturam Delineatae (1791) and Abbildungen Ôkonomischer Pflanzen (1792–1794), for which Happe presumably was the artist and engraver and possibly the colorist of many of the plates.

In 2003 Malcolm Beasley, botany librarian (now retired) at The Natural History Museum, London, kindly checked six sample images from our volume against the indices in these four books in his library, as well as some others in the Entomology Library. He offered the suggestion that ours "may have been a possible additional volume to the Botanica Pharmaceutica set, as the images have a similarity in their scale and in the families included." Mr. Beasley described the title page to their work as "ornate with views of countryside and scenery with the Flora Happiana engraved on a stone in the foreground." Our own volume of drawings has a title page annotated "this page executed later, by another hand, not Happe's," with a helmeted female (Flora Happiana?) atop a multi-tiered Baroque pedestal with ball finials and truncated pyramid or obelisk, adorned with sheaves festooned with pink ribbons. In the foreground is an escutcheon with the words "Fora [sic] Happiana." Therefore it is not unreasonable for us to conclude that the Hunt Institute's volume was a work awaiting publication.

Rachel Hunt may have acquired this album between 1942 and 1952, the range of years of other correspondence with this New York dealer. For additional information, see the Hunt catalogue entry cited above.

Thumbnails of the Happe images have been added to the Catalogue of the Botanical Art Collection at the Hunt Institute database. To locate these images in the database, search on the artist's last name. To inquire about publishing these images, please contact the Art Department. 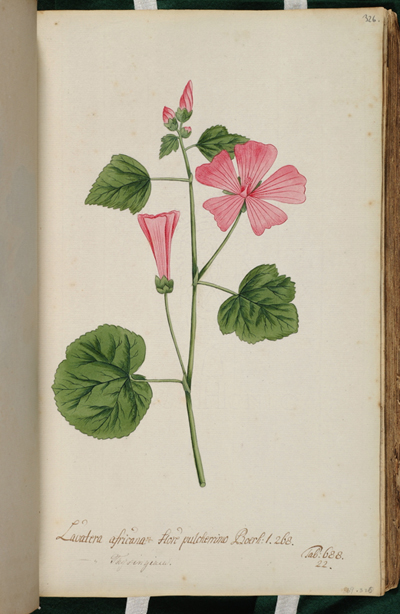