Georg Dionys Ehret (1708–1770) dominated the field of botanical illustration in the 18th century and is considered to be one of the finest plant illustrators of all time. His illustrative skill and botanical precision led to his involvement with the world's leading scientists and influential patrons and to his important contributions to many pictorial publications. Born in Heidelberg in 1708, Ehret received drawing lessons from his market-gardener father and worked as a journeyman-gardener. While gardening at the Margrave Karl III Wilhelm's estate in Baden, he began to paint the garden's flowers and received attention for his artistic talent. He met German pharmacist and botanist Johann Wilhelm Weinmann (1683–1741) and made nearly 500 paintings for Weinmann's florilegium Phytanthoza Iconographia (Regensburg, 1737–1745), which contained 1,025 plates illustrating approximately 4,000 native and exotic flowers, fruits and vegetables cultivated in Germany. Ehret was commissioned by his life-time friend and benefactor, the Nuremberg physician, Christoph Jacob Trew (1695–1769), who produced two of the most beautiful botanical color-plate works, Plantae Selectae (Nuremburg, 1750–1773) and Hortus Nitidissimis (1768–1786), both of which included several reproductions of Ehret's paintings. In Holland he met Carolus Linnaeus (1707–1778) and engraved a "tabella" for his new system of plant classification. Through Linnaeus, Ehret met the Dutch banker George Clifford (1685–1760), who commissioned Ehret to illustrate the plants on his estate, and these were included in Linnaeus' Hortus Cliffortianus (Amsterdam, 1737). Ehret moved to England in 1736 and enjoyed the patronage of the royal physician Richard Mead (1673–1754), who commissioned him to make drawings for Transactions of the Royal Society. Through his association with Hans Sloane (1660–1753), founder of the British Museum, Ehret continued to receive commissions to illustrate botanical treatises and scientific journals. He made over 150 paintings for the private collection of the Duchess of Portland, Margaret Cavendish Bentinck (1715–1785), and was also much in demand as a teacher of flower painting. Ehret illustrated several travel books and florilegia and was quite prolific, often working on vellum. In 1757 he was made a Fellow of the Royal Society. He died in London in 1770 at the age of 62.

Thumbnails of the Ehret images have been added to the Catalogue of the Botanical Art Collection at the Hunt Institute database. To locate these images in the database, search on the artist's last name. To inquire about publishing these images, please contact the Art Department.

The Art Department has devoted two exhibitions to Ehret's work, the 1967 Georg D. Ehret: A Selection of His Botanical Paintings and the 1997 Botanical Art by Georg Dionysius Ehret, and included selected items in numerous shows over the years, such as Flora Portrayed (1983) and Gifts of Winter (2000).

The Art Department also has a watercolor and gouache painting by Jacob van Huysum (ca.1687–1740) with floral details by Ehret. A thumbnail has been added to the Catalogue of the Botanical Art Collection at the Hunt Institute database. 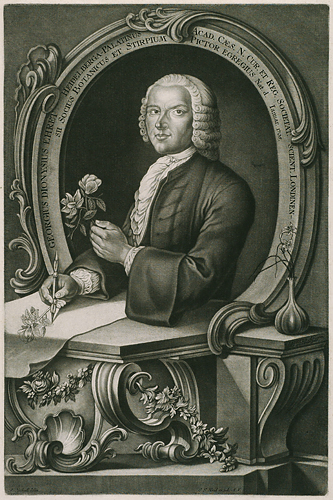