In May 2021 the Art Department received an album of 72 watercolors of Malaysian tropical fruits, flowers and plants of economic importance that were painted (?1837–1851) by unknown artists of Malaysian or Chinese descent. The album was originally owned by Joseph Balestier (1788–1858), first U.S. Consul to Singapore (confirmed 4 July 1836–official resignation 21 January 1852), and consequently by the descendants of his half-brother Joseph Nerée Balestier (1814–1888). Accompanying the album was a calling card of Mrs. Henry Wolcott Balestier (a great niece-in-law through marriage) with the handwritten notation "Book was drawn and painted by free hand native of East India about 85 years. 1924." Since the album's paper is watermarked Whatman 1837, we may surmise that the images were painted on or after that year and before Joseph Balestier's departure from Singapore in 1851. The album was delivered by friends of Sara Lawrence, executor of the Richard John Naskali estate, which stipulated that it be donated to the Hunt Institute. In 2002 Naskali (1935–2018) purchased it from a Balestier descendent living in Idaho, and the album remained a prized possession until his death. Many of the Malaysian plant names written on the bottom of each watercolor were verified by Muralithran G. Kutty, a Malaysian graduate student in Material Science Engineering at the University of Idaho on 8 October 2001. Naskali verified the binomials. Between 2005 and 2006, the album was conserved and rebound by Holly Moore, Lloyd E. Cotsen Head of Conservation, and photographed by John Sullivan, Head of Imaging Services, Huntington Library, Art Museum and Botanical Gardens, San Marino, California.

Along with the donated album were boxes of published materials and correspondence documenting Naskali's personal research and travels, which will be deposited in our Archives as the Richard John Naskali collection no. 386. He traveled extensively to learn more about the Balestiers, this album and the period in which it was created. His findings included possible, but unverified, threads to other important collectors and naturalists of the 19th century. Naskali discovered that images of the same tropical plants, painted in a similar style, were included in the Hugh Low Collection at the Royal Botanic Gardens, Kew. Low (1824–1905) was a naturalist and British colonial administrator who explored and collected orchids, mangosteens, nepenthes and nutmegs on the Riau Islands and along the Sarawak River in Borneo from 1844 to 1846. He sent many new species to his father's nursery in Clapton, England, for cultivation and sale. His 30-year career as colonial secretary to the Governor of Labuan, Rajah James Brooke, and subsequent office holders, gave Low access to and an interest in engaging with native peoples and their culture and use of plant material. In fact the Balestier album and Naskali's research at Kew were mentioned in Phillip Cribb's essay in A Botanist in Borneo: Hugh Low's Sarawak Journals, 1844–1846:

Their similarity to Low's set of drawings and another set at Kew suggests that sets of drawings of useful and ornamental plants may have been commercially available in Singapore, the artists being local people or possibly Chinese. ... We suspect that the artists in Singapore were Malay because all of the fruits and spices in the bound set are identified by their Malay names (Low et al. 2002, p. 119).

After a comparison of the paintings in the Balestier album with those illustrated in the aforementioned publication, 12 are of the same species in different stages, or share similarities in structure and style. Of those 12, it is the painting of Garcinia mangostana Linnaeus that appears to be the closest copy. The overall similarity in the composition, including the position of the main stem, unripe fruits and overlapping leaves (including those with curled tips), suggests that both images were copied from the same drawing. There are variations from the Balestier album, including the downward turn of the ripe fruits, different seed and fruit details, and the color of the inflorescence (pale pink in the Balestier album and red in the Hugh Low collection). In a 4 March 2019 email to Naskali, M. Iskander, an expert at the National Heritage Museum, Singapore, also posited that "collectors ... circulated some of their drawings to other collectors and as such, copies would have been made by the artists commissioned by them."

Giving additional credence to the availability of these drawings for purchase in Southeast Asia is an image of Ananas comosus (Linnaeus) Merrill in the collection of John Reeves (1774–1856), the English naturalist and collector of Chinese natural history drawings, at the British Museum of Natural History, London, that strongly resembles the style of the pineapple represented in the Balestier album. The caption in the catalogue notes, "As this drawing bears no Chinese name, no crest and no number, it is possibly a stock picture acquired by John Reeves or his son, the source of which is now unknown" (Whitehead and Edwards 1974, pl. 15).

In 1834 Balestier was appointed U.S. Consul to Rhio, a Dutch East Indies port open to American trade. He instead chose to reside in the Settlement of Singapore with his wife and son, and from there he tirelessly advocated for American trade through this British port. Two years later he was named U.S. Consul to Singapore. Since the Consul position was unpaid, it was necessary that Balestier have other business interests to support his family and the myriad visitors they hosted in their home. These included local citizenry, ship captains, such as Lt. Charles Wilkes (1798–1877) commander of the United States Exploring Expedition (also Wilkes Expedition, 1838–1842), and missionaries, such as the American Alfred North (1807–1869). He also had to pay the board or hospitalization of injured, ill or shipwrecked sailors and passengers (sometimes for months at a time). He had a sizeable library of books in numerous European languages, and the home was filled with Asian luxury items (Buckley 1965, p. 469), and a garden with Chinese fruit trees and rare plants (Anonymous 1848). For additional income, Balestier sold goods arriving from American trade vessels and arranged for the transit of cargo and passengers on outgoing ships. Balestier was a founding member of the Singapore Chamber of Commerce (1837) and the Singapore Agricultural and Horticultural Society (1836), and he and other members experimented with growing tropical crops, such as sugarcane, cotton, coffee and spices, especially nutmeg (Turnbull 1972, p. 146–147). Since 1831 Balestier had owned and operated a 40-acre sugarcane plantation, where he refined sugar and distilled rum. The failure of the Balestier plantation was a result of his heavy investment in clearing land and adding equipment and the diminishing profits due to British tariffs, competition and a lack of access to the American market. After the consecutive deaths of Balestier's 24-year-old son Joseph Warren Revere (1844) and his wife Maria (1847) and the decline of his health and the revenue from the plantation, Balestier departed Singapore for Washington, D.C., on a leave of absence. During this time the plantation was put up for auction and sold in 1848. Because of Balestier's knowledge of the resources in that part of the world, the following year President Zachary Taylor appointed him a Commercial Agent to negotiate treaties of friendship and trade between the rulers of Cochin China, Siam, Sarawak and Labuan. Balestier, impatient for results, was less than diplomatic in his interactions, and his only success was with the Sultan of Brunei in Borneo. His visit to Sarawak, Borneo, and the island of Labuan off the coast, occurred during the governorship of the Rajah of Sarawak, James Brooke, and it is likely that Balestier met Hugh Low at this time. Balestier, now in poor health, resigned in 1851 and sailed for the United States, disembarking in New York on 28 September of that year. Little is known of his final years, beyond his marriage to the widow Caroline Matilda Fitzhugh Thompson in March 1852 in Fredericksburg, Virginia. She passed away in 1857, and by mid-1858 Balestier had moved to York, Pennsylvania, where he died a few months later and is immortalized on a marble tablet in St. John the Baptist Episcopal Church as a distinguished U.S. diplomat in U.S. Consular Service in Farthest India (Hales, p. 333).

An Astabula, Ohio native, Naskali earned a B.S. in floriculture and ornamental horticulture and an M.S. and Ph.D. in botany from Ohio State University. He was a professor of botany and plant anatomy (1967–1987) in the Department of Biological Sciences at the University of Idaho, Moscow, Idaho, and, according to the university's Web site (https://www.uidaho.edu/infrastructure/facilities/arboretum/about-us/history), the first director (1987–2003) of its 63-acre Arboretum and Botanical Garden. During his tenure as director, he advanced the profile and development of the arboretum groves and plantings and its use as a "living classroom" (Anonymous 2019, p. 11). His love of travel took him to Europe, Antarctica, Madagascar and Asia, and he was an avid photographer and collector of botanical books and artwork. For this album alone, Naskali's research took him to Singapore, where he visited the Asiatic Society, the Library and the National Archives and the Singapore Botanic Garden and National Parks, and he photographed the areas Balestier maintained during his tenure. His research into the Balestier album also took him to many gardens, museums, libraries and archives in London, Washington, D.C., Boston and Brattleboro, Vermont. Naskali also became fascinated with the genealogy of the Balestier family, which took him down the many rabbit holes of familial connections. Balestier's wife Maria (1785–1847) was the daughter of the patriot Paul Revere (1735–1818), and the author and journalist Rudyard Kipling (1865–1936) was the son-in-law of Balestier's half-brother Joseph Nerée Balestier. Naskali also researched American sailing vessels and their cargo and scoured microfiche of newspapers, journals and Department of State records. During his career Naskali co-authored papers and received numerous awards, and, because of his interest in Asian plants, the Dr. Richard Naskali Asian Grove was posthumously renamed in his honor. Also, the Richard J. Naskali Endowment for the Academic Advancement of the Arboretum supports the University of Idaho's library.

United States Congress Senate. 1852. Executive Documents Printed by Order of the Senate of the United States during the First Session of the Thirty-Second Congress, 1851–2. 16 vols. Washington, D.C.: A. Boyd Hamilton. Vol. 7.

Thumbnail images of the 72 watercolors in the album may be seen by searching for 8549 in the accession field of the Catalogue of the Botanical Art Collection at the Hunt Institute database. 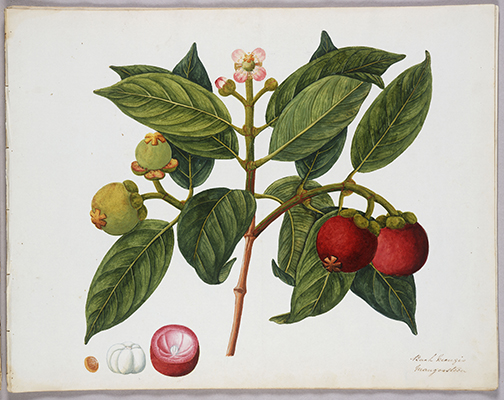 Garcinia mangostana, Mangosteen [Garcinia mangostana Linnaeus, Clusiaceae], watercolor on paper by an unknown artist, ?1837–1851, 38 × 48 cm, HI Art accession no. 8549.48. This artwork has a predominant number of similarities to one in the Hugh Low Collection at the Royal Botanic Gardens, Kew.