Gérard van Spaendonck (1746–1822) was born in Tilburg, Holland, and was influenced by the masters of Dutch flower painting. He apprenticed in Antwerp with Guillaume-Jacques Herreyns (1743–1827) from 1764 to 1769 and moved to Paris in 1769. By 1774 van Spaendonck was a designer for the Sévres porcelain factory, that same year he was appointed painter in miniature to King Louis XVI and became a popular instructor of the young ladies at the court of Versailles. From 1777 until his death, he exhibited at the Paris Salon and transformed the development of flower painting in France. His work was prized by collectors, such as Claude Henri Watelet (1718–1786), who helped him obtain the appointment of professeur de peintre de fleurs at the Jardin du Roi in 1780, where he contributed over 50 paintings on vellum to the collection between 1781 and 1785. Van Spaendonck was proficient in several mediums including charcoal, oil, gouache, watercolor and printmaking. In 1781 he also became a member of the l'Académie Royale (later l'Académie des Beaux-Arts) and was named conseiller in 1788. When the Jardin du Roi was reorganized in 1793 as the Muséum National d'Histoire Naturelle, van Spaendonck was appointed professeur d'iconographie, a position that was created specifically for him. In this new post he was expected not only to continue the painting of the vélins (works on vellum) but also to find and train new talent to accurately portray plant subjects. Van Spaendonck was highly respected as an artist and a teacher and had a profound effect on his many students at both the Jardin and his private studio, including Pierre-Joseph Redouté (1759–1840), who was appointed his assistant in flower painting in 1794, and Pancrace Bessa (1772–1846).

Gérard van Spaendonck's ability to capture the naturalism of living plants in his drawings and paintings is as inspirational today as it was over 200 years ago. Twenty-four of van Spaendonck's dynamic charcoal drawings were reproduced as stipple engravings for his Fleurs Dessinées d'après Nature (Paris, l'Auteur, au Jardin des Plantes, 1801). It was issued in six parts of four prints and sold as colored or uncolored versions. Pierre François Le Grand (1743–1824) made most of the engravings, with others by Carrée (fl.1801), Alexandre L. X. Chaponnier (1753–ca.1806), Jean Godefroy (1771–1839) and Louis Charles Ruotte (1754–1806). These prints remain some of the best examples ever produced using this printmaking process. Van Spaendonck considered these prints a valuable teaching aid for his students. They portrayed not only the incredible life force of each documented plant but also revealed that stipple engraving could effectively capture the subtle variations of tonality in a drawing or painting. The Hunt Institute Art collection includes 16 of the 24 plates from this publication, 14 printed solely in black ink and two printed in color.

Thumbnails of the van Spaendonck images have been added to the Catalogue of the Botanical Art Collection at the Hunt Institute database. To locate these images in the database, search on the artist's last name. To inquire about publishing these images, please contact the Art Department.

The Hunt Institute has included work by Gérard van Spaendonck in numerous exhibitions and their accompanying catalogues over the years, including Nosegays and Bouquets: Flower and Fruit Arrangements in Western Art (1981), Flora Portrayed (1983), Printmaking in the Service of Botany (1986), Pancrace Bessa and the Golden Age of French Botanical Illustration (2008) and Duets (2014). 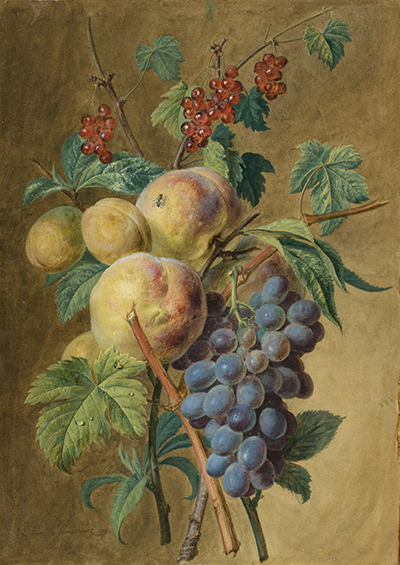