Hunt Institute's collection contains seven mostly incomplete sets of instructional wall charts from the late 19th and early 20th centuries that were produced in Europe and circulated around the world. Using the less expensive printing process of lithography (some with hand coloring and some printed entirely in color), these large-scale charts featured the characteristics of important plant families (often in magnified detail) and were used in introductory to advanced botany courses. As information became accessible in different formats, this important record of educational presentation fell into disuse. The charts in the Institute's collection were often retrieved from neglect or disposal and donated for preservation. Such charts remain sources of valuable information, especially for students of plant anatomy and systematics and the history of botanical education. The Institute welcomes any additional information about these charts.

Our collection includes the complete set of nine charts on systematics titled Prof. Henslow's Botanical Diagrams. Drawn by W. Fitch, for the Committee of Council on Education: Department of Science and Art, Phaenogamous Plants. The illustrations for the charts were by Walter Hood Fitch (1817–1892), who later went on to be an illustrator at the Royal Botanic Gardens, Kew, and were based on the drawings of John Stevens Henslow (1796–1861) and his eldest daughter Anne Barnard. The charts were published and used to promote Henslow's teaching methods in schools throughout the nation. This series was printed by Day & Son in 1857. (See HI Art accession nos. 6866.1–6866.9.)

There also is one oversize color lithographed chart (115 x 159 cm, attached to a wooden support) by Walter Heubach (Munich) and Hans Meierhofer (Zürich) for Schmeils Botanische Wandtafeln (Leipzig, Quelle & Meyer, 1913–1914). The German biologist Otto Schmeils (1860–1943) was a reformer of the biological sciences in primary education. The number of charts in this series has yet to be determined. (See HI Art accession no. 7691.1.)

We also have 16 color lithographs by Max Richter (1860–?) from Svenska Växter (Swedish plants, Stockholm, A.-B. P. A. Norstedt et Söner) and two half-tone reproductions from Köksväxter (Vegetables) I and III. The purpose, the number of images in the series and the date of publication have yet to determined. (See HI Art accession no. 3396–3411.)

In a similar vein, there are 13 color half-tone reproduction posters by Gerd Rissler (Sweden, 1909–1996) for Svenska Växtsamhallen (Swedish plant colonies, Stockholm, Norstedts Skolboksförlag, 1945–1946). These schoolroom charts represent almost 130 plant species in 8 of Sweden's habitats, including the nutrient-rich lake, nutrient-poor lake, högmossen (raised bog), mixed evergreen forest, wooded meadow, beech forest, mountains and seashore. Each was priced at 6:50 kroner and the entire series was 75 kir. Rissler illustrated many schoolbooks in Sweden and an African travel series by Christina Brydolf. (These items are not accessioned.)

An acquisition from Auburn University Herbarium is 100 slides of plant anatomy subjects distributed earlier in the century by New York Biological Supply Laboratory and Cambridge Botanical Supply Company. Twenty additional slides in this collection are of living plants, cross-sections, and habitat scenes. Auburn owns a set of German charts "sold and distributed by Denoyer-Geppert Company ... Chicago." (These items are not accessioned.)

Schmid, R. 1985. The phenomenon of botanical wall charts (botanische Wandtafeln) from 1874 to 1914. Amer. J. Bot. 72(6): 879. [Abstract of a talk presented at the meeting of the American Institute of Biological Sciences held in August 1985 at the University of Florida, Gainesville.]

Images of the Wall Charts have been added to the Catalogue of the Botanical Art Collection at the Hunt Institute database. Most of the charts can be located by searching under the accession field (see accession numbers given with each collection above) in the database. To inquire about publishing these images, please contact the Art Department. 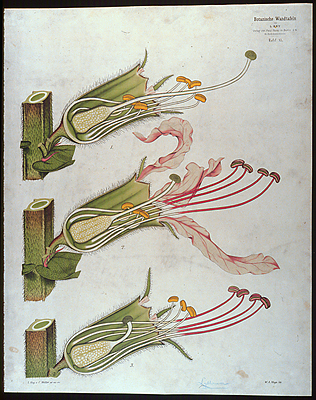