The Library has digitized the plates for Robert Hooke (1635–1703), Micrographia, or Some Physiological Descriptions of Minute Bodies Made by Magnifying Glasses with Observations and Inquiries Thereupon (London, Printed by J. Martyn and J. Allestry, 1665).

Robert Hooke's Micrographia is best known for its greatly magnified views of insects, but he looked through his microscope and telescope at a variety of animate and inanimate subjects and then drew and theorized about them. His insect illustrations have been famous and in demand from the time that he made them. The flea and the head louse were two insects with which many people were familiar in 17th-century England and apparently in 18th-century France as well since both images were copied (with attribution to Hooke in the accompanying text) and presented among the natural history plates in plate volume six of Denis Diderot's (1713–1784) Encyclopédie (text volumes, Paris, Braisson, [etc.], 1751–1765; plate volumes, Paris, Braisson, [etc.], 1762–1772). Hooke's book came about through his involvement in the Royal Society in London.

Hooke began life as a sickly child blessed with an active and inventive mind. He was educated by his father at home and, according to Brian J. Ford (1998), had "a penchant for making scientific toys — clocks, model boats, sundials" (p. 2). When Hooke was 13, his father died, leaving a small inheritance. Hooke moved to London, attended Westminster School where he excelled in his studies, was briefly apprenticed to learn to draw and paint and then matriculated at Oxford. There he met the men who would become his friends, colleagues and mentors. At Oxford he became Robert Boyle's research assistant. Boyle (1627–1691) was a founding member of the newly formed Royal Society, and in 1662 the society's fellows appointed Boyle's research assistant to be their curator of experiments. Later Hooke would become the secretary of the Royal Society.

Hooke's personal circumstances were constraining. His small inheritance enabled him to pursue an education but without the independent means enjoyed by many of the young gentlemen with whom he met and mingled. On the other hand his brilliant and creative mind enabled him to overcome these constraints to embark on a scientific career in the company of others with similar interests. Although he seems not to have been accepted as a social or professional equal by the fellows of the Royal Society, his talents and insightfulness were recognized, encouraged and employed in the context of the collective scientific explorations of the society.

Thus in 1663 Hooke was asked to give periodic microscope demonstrations to the society, which he did on a regular basis throughout that year. The drawings that he made in the course of that work were the foundation for many of the 38 plates in Micrographia. The book itself came about in relation to earlier microscopy drawings made by Christopher Wren (1632–1723), a physician and architect whom Hooke had met at Oxford. Wren had made some microscopy drawings of his own in the 1650s, and some of them had been shown to King Charles II (1630–1685). The king was enthusiastic about them and expressed the wish that a book be made about such work. According to Janice Neri (2008), a request from the king was made to the Royal Society, but because the Wren drawings were not made in the context of the society, it was unclear to the society as to how to proceed. When the project was proposed to Wren, he was no longer interested, being involved in other work, and so the project was given to Hooke. This assignment was timely, as Hooke had already been thinking about publishing his drawings and observations, although with a wider scope beyond his initial demonstrations and discussions within the society.

In his work for Micrographia this brilliant man explored the microscopic world, drew what he saw and theorized about it, so that his book goes far beyond being a mere descriptive presentation of what he saw through his microscope. In the preface he grounds his process with two basic tools, "a sincere hand, and a faithful eye, to examine, and to record, the things themselves as they appear" (1665, p. [viii]). He presented objects that he viewed through the microscope and telescope in the style of natural history illustrations. With one or several objects presented on a white background, he showed greatly enlarged views of the structure of minerals, plants and tiny insects as well as other subjects (including the surface of the moon), opening these visions to the unaided eye and expanding his audience's understanding and appreciation of the natural world. He not only showed views that most people would never otherwise have seen, but also he gave his own observations and theories about the views presented.

Beyond this work, Hooke was also an architect, and he made important contributions to astronomy and physics. From humble beginnings, early adversity and inadequate social status emerged the scientific brilliance of Robert Hooke, of which his Micrographia is one facet.

Hooke, R. 1665. Micrographia, or Some Physiological Descriptions of Minute Bodies Made by Magnifying Glasses with Observations and Inquiries Thereupon. London: Printed by J. Martyn and J. Allestry.

The Micrographia plates are available as a PDF.

For biographical citations for this subject, see the Hunt Institute Archives Register of Botanical Biography and Iconography database.

The entire book is accessible at the Biodiversity Heritage Library Web site. 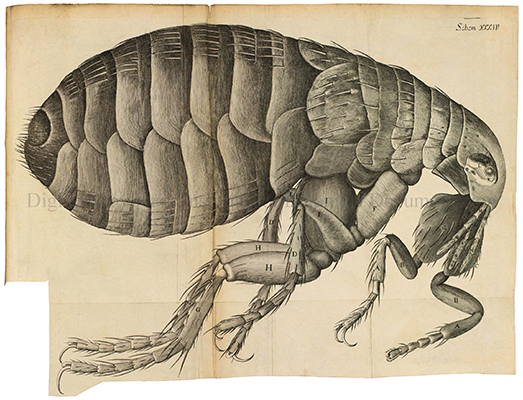 [Flea], engraving by an unknown engraver after an original by Robert Hooke (1635–1703) for his Micrographia, or Some Physiological Descriptions of Minute Bodies Made by Magnifying Glasses with Observations and Inquiries Thereupon (London, Printed by J. Martyn and J. Allestry, 1665, pl. 34), HI Library call no. BA1 H782M RR.