To celebrate our 50th anniversary, Hunt Institute presented rare gems from the original collection of our founder Rachel McMasters Miller Hunt (1882–1963). Her early love of nature and books grew into a lifelong pursuit of rare or historical works about plants, gardens and botany. She became fascinated by the people associated with these books and also collected their portraits, letters, manuscripts and original artworks.

Elmhurst, the home and gardens of Rachel and Roy Arthur Hunt (1881–1966) on Ellsworth Avenue in Shadyside in Pittsburgh's East End, housed her collection of rare books, artwork, antique furniture, tapestries and sculpture and reflected her love of plants and their history. Throughout her life Rachel welcomed visits from scholars, hosted garden clubs and entertained publishers, book collectors and authors at Elmhurst and also shared her collection through talks and gallery and museum exhibitions. By the 1950s Rachel Hunt's collection was widely known for its excellence and was sought by some of the country's leading universities and botanical centers. Under the editorial stewardship of her personal librarian, Jane Quinby (1901–1979), and with essays from leading authorities on her collection and the historical background of the items in it, work commenced on the Catalogue of Botanical Books in the Collection of Rachel McMasters Miller Hunt (Hunt Catalogue; 1958–1961). Wanting the collection to remain in Pittsburgh, the Hunts decided to donate it and a building to Carnegie Institute of Technology (now Carnegie Mellon University) to house both her collection and a campus library.

Dedicated in 1961, the Rachel McMasters Miller Hunt Botanical Library was envisioned as a research center focusing on the history of botany and the history of botanical publication and as a repository where her collections would be preserved, curated, augmented and made accessible to researchers. By 1971 the organization had so diversified that it was renamed Hunt Institute for Botanical Documentation with four programmatic departments of Archives, Art, Bibliography and the Library. In the last fifty years Rachel Hunt's original collection has been substantially augmented in all four departments. In accordance with the Hunts' original vision of a living collection with public availability, the Institute maintains a regular exhibition and publication program and accessibility for research on a variety of scientific and cultural subjects related to the plant sciences.

Beginning with Rachel Hunt's early interest in books, bookbinding and collecting, the materials on display in this exhibition were divided by subject and reflected her interests in the history of the herbal, the development of gardens and garden plants, the foundation of botany as a science and the botanical discoveries made through travel and exploration. The exhibition concluded with the foundation of the Hunt Botanical Library, its evolution to Hunt Institute for Botanical Documentation and descriptions of key aspects of the four departments. A color-illustrated catalogue accompanied the exhibition.

We offered several talks and tours during this exhibition.

On Sunday, 18 September, Angela Todd (archivist, 2000–2013) presented "USDA botanist B. Y. Morrison and his forward-thinking secretary, May Blaine." Morrison's sketches and ink drawings of private and public gardens in Asia date back to 1915 when he received a travel fellowship from Harvard, but his lively drawings are extant due solely to the encouragement of his secretary, May Blaine. As women entered colleges and universities but did not rise to the ranks of scientists, those degreed women taught high school botany and worked as secretaries, lab assistants and wives. The women in the USDA secretarial pool all had post-secondary schooling, including Blaine. She was secretary to the head of the Department of Plant Exploration and Introduction from 1918 to 1955, serving eight different heads, including Morrison (1891–1966). Blaine not only sent her private correspondence with and short biographies of USDA explorers and botanists to Hunt Botanical Library but also convinced Morrison, who saw no need to preserve his legacy, to send his drawings, too.

During Carnegie Mellon's Cèilidh Weekend, Catherine Hammond (assistant curator of art, 2011–2012) gave a gallery tour on Saturday, 29 October, and Publication and Marketing Manager Scarlett Townsend gave a tour on Sunday, 30 October, of the antique furniture in the reading room, which was designed to capture the essence of Rachel Hunt's personal library. The herbals, the autograph letters and the Redouté paintings were important elements of her original collection, but equally important to her was the setting in which these items were enjoyed. She did not want her new library to look common or commercial. With the help of Harold LeBaron, her longtime interior decorator, and George H. M. Lawrence (1910–1978), our founding director, she chose items reflecting her tastes and personality.

Curator of Art Lugene Bruno's talk, "Pierre-Joseph Redouté and his collaboration with botanists," was on Sunday, 6 November. Pierre-Joseph Redouté (1759–1840) is considered to be the most famous flower painter of the 19th century. He exhibited his floral bouquets in the Paris Salon and illustrated some of the most beautiful color-plate folios ever produced. What is less known is the work that Redouté created for many important botanists of his era. This talk will include his work for Charles Louis L'Heritier (1746–1800), who was the first to recognize that Redouté's talent could be channeled into creating scientific illustrations that would compliment botanical texts, which helped to launch Redouté's multi-faceted career. Prints by Redouté from a selection of publications will be on temporary display during the talk.

Librarian Charlotte Tancin's talk, "At the center of the network: Dutch botanist Carolus Clusius (1526–1609)," was on Sunday, 4 December. Botanist, traveler, writer, correspondent and exotic plant and animal enthusiast Clusius used his vast personal network to gain and spread information, exchange seeds and plants, and advance knowledge of the natural world. His career touched all four subject areas of our 50th anniversary exhibition: herbals, gardens, botany and travel and exploration. His stature and legacy made him a major figure in the history of botany and plant introduction and thus a natural subject of interest for Rachel Hunt. 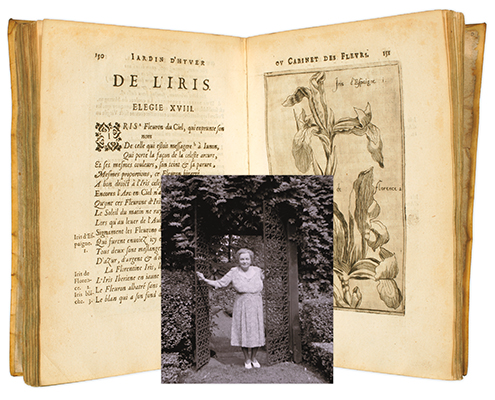