Originally published as part of the Index to Scientific Names of Organisms Cited in the Linnaean Dissertations together with a Synoptic Bibliography of the Dissertations and a Concordance for Selected Editions (1999), the database of the Original Linnaean Dissertations includes in each entry a PDF of the original dissertation, an English summary, the Lidén number, respondent, title, date of defense, pagination, short title, Lidén title, Soulsby title, Drake title and notes. The Lidén, Soulsby and Drake information refers to published reference works that contain bibliographic information about the Linnaean dissertations.

The 186 original Linnaean dissertations, published between 1743 and 1776, were the joint products of Carolus Linnaeus (1707–1778) and his students. Their subject matter included such diverse topics as Baltic coral, the flora of England, insects, medical botany, the botanical garden at Uppsala, dogs and chocolate. In accordance with the standard practice of the time, although the studies were the 18th-century equivalent of today's doctoral dissertations, the ideas defended therein were those of the praeses rather than of the respondent. Thus the dissertations are often attributed to Linnaeus, rather than to the students who published and defended them.

The records in the database include fields for: PDF of original dissertation, Lidén Number, Respondent, Title, Date of Defense, Pagination, Short Title, Lidén Title, Soulsby Title, Drake Title, Summary and Note. The dates are based on those in Soulsby's A Catalogue of the Works of Linnaeus, ed. 2 (1933). Notes have been added to reflect those instances in which information on copies in the Strandell Collection at the Hunt Institute ("Strandell copies" hereafter) differs from that reported by Soulsby et al.

Curly brackets {} indicate date information that has been supplied in manuscript on our copies of the dissertations, whether to fill a blank or to alter printed information. Regarding pagination, any references to unnumbered or misnumbered pages refer to all Strandell copies of a given dissertation unless our copies are at variance with one other, in which case a note is supplied. Square brackets [] indicate unnumbered preliminary, beginning or ending pages. In a few cases where there are page numbering errors on a beginning or ending page, notes in parentheses () are added to describe these irregularities.

We have omitted initial dedicatory phrases and further qualifying phrases from the titles here. The short title is that by which the dissertation is cited in the Index to Scientific Names database. The number and title used by Lidén to cite each dissertation are given, as are the titles by which the dissertations are cited in the standard reference works by Soulsby and Drake. The short titles are those used in G. Drake af Hagelsrum's Linnés Disputationer (Nässjö, 1939). The Lidén numbers, often used as a standard sequencing for the Linnaean dissertations, are provided for reference and to facilitate searching the database. They come from Johan Henrik Lidén's Catalogus Disputationum (Uppsala, 1778–1856, continued by others). The information for the English summaries was compiled by Hunt Institute staff from Richard Pulteney's A General View of the Writings of Linnaeus, ed. 2 (London, 1805) and other sources.

The original dissertations have been scanned and converted to PDF files. For higher resolution 300 dpi JPEG images of these dissertations, please contact: Charlotte A. Tancin at ctancin@cmu.edu. 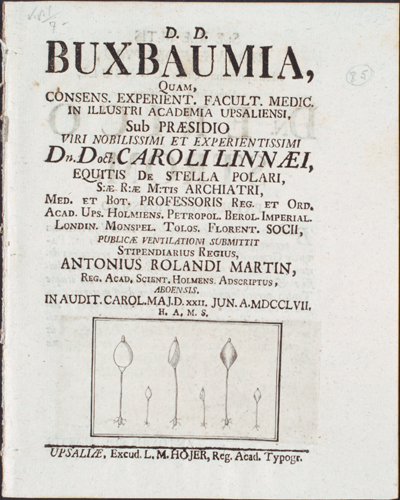