Pierre-Joseph Redouté began his career as a self-taught artist at the age of 13. About ten years later he made his way to Paris and turned his focus to botanical illustration. He eventually became an official court artist to the royalty of France as well as an accomplished botanist. Throughout the French Revolution and the Reign of Terror, Redouté continued to paint for royalty. To this day, Redouté is renowned for his beautifully delicate and botanically accurate flower paintings. He participated in nearly 50 publications, producing over 2,100 plates depicting over 1,800 species.

This collection includes several pieces of correspondence sent to Redouté, including a certificate with the French Imperial seal, appointing Redouté official court Painter of Flowers to the Empress. There is also a series of undated letters from Jules Janin (1804–1874), a popular French theatre critic and close friend of Redouté, to Redouté's eldest daughter, Joséphine Redouté (1786–?). Besides these autograph items, there are newspaper clippings related to Redouté and various magazine and newspaper articles published shortly after his death. The two oversized folders contain passports and a contemporary engraved portrait. Many items personally written by Redouté are kept in the Hunt Institute Archives' General Autograph Collection.

A finding aid for this collection is available online, and it includes a link to a PDF of the Redouté items from the General Autograph Collection.

The first formal exhibition at the Hunt Botanical Library was Exhibition of Redoutéana, a survey of the artworks, archival materials and published illustrations of Redouté collected by Rachel Hunt over her lifetime. In the last year of her life Rachel continued to acquire works by Redouté, as the artist she most highly admired and in anticipation of this exhibition; however, she died just months before the exhibition opened to the public on 21 April 1963. The accompanying Catalogue of Redoutéana contains extensive biographical and bibliographical information as well as descriptions of the artwork and manuscripts.

Our Art Department has 143 artworks by Pierre-Joseph Redouté, including line and stipple engravings, pencil drawings and watercolor paintings.

Our Library holds 22 titles illustrated by Pierre-Joseph Redouté along with some later editions and a few second copies that were in Rachel Hunt's library and additional works acquired following her death in 1963.

For thumbnails of the Redouté images, see the Catalogue of the Botanical Art Collection at the Hunt Institute database. 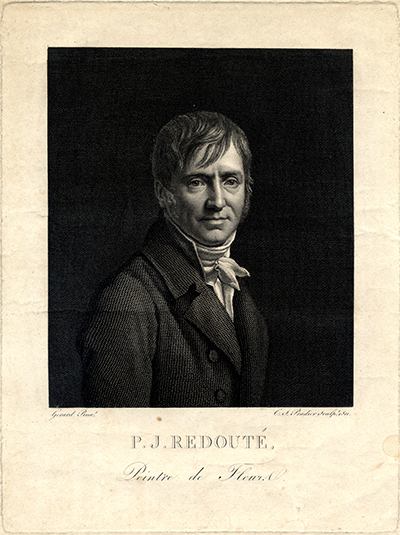